Sir Isaac Julien, distinguished arts professor, acclaimed filmmaker, and artist, is having a blockbuster summer—he received a knighthood, opened a new exhibition, and was invited to join the Academy of Motion Picture Arts and Sciences, highlighting the importance of the arts in a current climate of social transformation

When he’s caught up in a project, Julien is far beyond the limelight. He spends his time communicating with close collaborators, traveling all over the world, working with professional actors, and digging through archives.

So it’s no wonder that Julien seems a bit stunned by the ultra-high-profile summer he’s been having.

First, he found out that he was to become a knight. Julien was listed among a group of luminaries in Queen Elizabeth’s 2022 Birthday Honours List in honor of her Platinum Jubilee on June 1 for his services to diversity and inclusion in art.

A month later, the Academy of Motion Picture Arts and Sciences, the international organization best known for the Academy Awards, extended an invitation of membership to Julien, putting him at center stage once again.

“Everything’s happening all at once,” said Julien wistfully, speaking through a Zoom screen from London.

Julien speaks candidly about the inevitable “ups and downs, swings and roundabouts” of the artist’s life. With all the attention he’s received this summer, it’s important to be level-headed and stay focused, said Julien, who divides his time between his home in Bloomsbury—an artistic and intellectual hub in London—and Santa Cruz.

His art practice breaks down the barriers between artistic disciplines, drawing from and commenting on film, dance, photography, music, theater, painting, and sculpture, uniting them to give voice to the experiences of disregarded, often Black, and queer narratives.

“I think about the sheer amount of concentration one needs to do the work,” Julien said. “One must try to not let anything including the high points detract from that. It’s important to keep one’s head in place, as it were, and one’s feet firmly on the ground.”

Julien, who had previously received the title Commander of the Most Excellent Order of the British Empire (CBE) in 2017, hopes these new distinguished honors will bring renewed attention to the bold and creative work that his students are undertaking at the Isaac Julien Lab at UCSC.

“Maybe this will mean people will become more aware of the work we do,” said Julien, adding that the lab is seeking fundraising support for its research.

He is also getting a high-profile solo exhibition next year at Tate in London, and hopes the show will travel to the Bay Area.

Julien co-founded this creative lab with his partner, the independent curator and writer Mark Nash, former head of contemporary art at the Royal College of Art in London. Nash is a professor of digital arts and new media at UCSC, focusing on postcolonial perspectives in contemporary art and cinema.

The Isaac Julien Lab immerses students in many of the disciplines Julien brings to bear in his own work, which has been exhibited at Tate, the Museum of Modern Art in New York, Centre Georges Pompidou in Paris, and MAXXI in Rome, as well as prestigious international cultural exhibitions such as the Venice Biennale, Performa, and documenta. 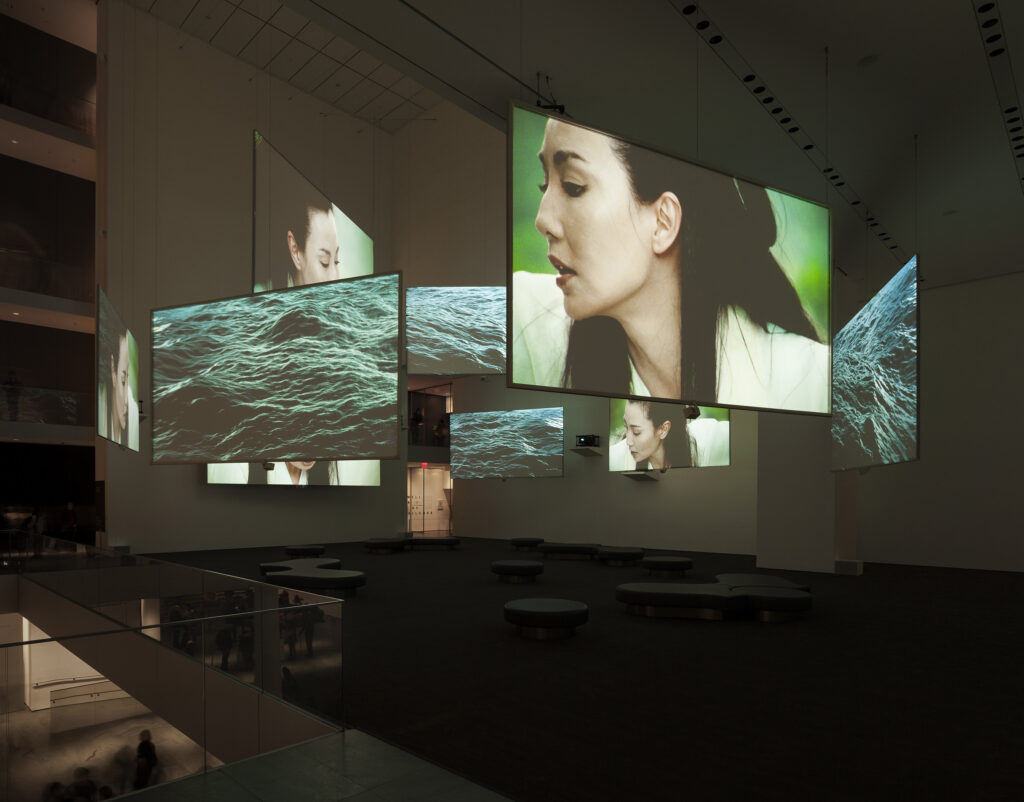 The lab is a collaboration between Julien, Nash, visiting scholar Vladimir Seput, and students from various disciplines, including film and digital media, history of art and visual culture, history of consciousness, and music.

“Like any experimental environment, the content and context of the workshop are constantly evolving,” said Joseph Finkel, a Ph.D. student studying musicology at UCSC. “Students read and debate ideas surrounding topics in critical theory and apply them to their art practice. Isaac gives his students an open forum to explore their research interests and present their work, such as short films, musical compositions, and academic papers.”

The lab is a place for artistic production, collaboration, the creation of innovative visual and sonic languages, and the intensive use of research to inform and enrich the projects. Students are also immersed in exhibition and installation work.

“DANM at UCSC exemplifies collaboration,” said UCSC Arts Division Dean Celine Parreñas  Shimizu, an award-winning filmmaker and scholar. “Students collaborate and work on their own projects with faculty who are world-class artists and scholars. For the past four years, Sir Isaac Julien has shared his platforms generously with our students, exhibiting with them in prestigious venues while teaching them in Santa Cruz and London, both through the Isaac Julien Lab.”

Though Julien and Nash have taught full-time at UCSC since 2019, their association with the campus goes back to 1994, when they were first invited to teach in the campus’s History of Consciousness Department.

Julien’s teachings at UCSC are informed by his artistic philosophies. His own filmmaking and installations draw freely from other disciplines, including journalism, dance, film history, photography, sculpture, painting, and architecture.

Professor Jennifer Gonzalez said that Julien imparts to his students the same sensibility, care, and strong sense of social justice that he brings to his work.

“Having worked with specialists across these fields internationally for several decades, Sir Isaac brings a wealth of knowledge, experience, and a rich network of professional contacts to our students in the arts at UCSC,” Gonzalez said.

Julien’s childhood and East London upbringing inform the global scope of his work. His parents, both immigrants from the Caribbean island of Saint Lucia, grew up in East London. His mother was a nurse. His father was a welder. As a youth, he was driven by curiosity, and a strong desire for untold stories.

Often, he felt cut off from Black history.

“One didn’t hear about the Harlem Renaissance or Black modernism, or see films that had a Black protagonist or had Black people as central actors in them,” Julien said. “Of course, one remembers that. I think my archival interests stem from the fact that there were historical narratives that were not being circulated.”

While studying at St. Martin’s School of Art in London, Julien co-founded Sankofa, an independent film and video collective dedicated to exploring Black culture. In 1989, his critically acclaimed feature film, Looking for Langston, evoked the private world of poet Langston Hughes. The writer and musician Greg Tate hailed it as the first film of its kind, praising it for evoking “the historical condition of being Black, gay, silenced, and incomprehensible.”

Julien traveled to China to shoot his beautiful and devastating 2010 nine-screen installation Ten Thousand Waves, which explores the tragic deaths of 23 undocumented Chinese migrant workers who drowned in incoming tides in 2004 while picking cockles in Morecambe Bay off the Lancashire Coast in northwest England.

Instead of going for a strictly linear, documentary approach, Julien interweaves the story of the tragedy with the ancient myth of the Chinese sea goddess Mazu, revered in the Fujian Province, where the cockle pickers once lived. In the film, the legendary Chinese actor Maggie Cheung plays Mazu.

“Mazu is the kind of goddess who looks after shipwrecked sailors in the sea and transports them to a place of safety,” Julien said. “I was thinking about Mazu as not being able to save these workers and began with that.”

Julien spoke of “the blind eye that was turned to their working conditions, which, in a sense, enabled the tragedy. They came from such a long distance to meet this tragic end. That resonated with me and related to my own parents and their journey from St. Lucia to England. I think, in a way, I wanted to go behind the headlines.”

His latest work, the film Once Again … (Statues Never Die), is a five-screen installation shot with accomplished actors in sumptuous black and white. Commissioned by the Barnes Foundation, a world-class collection of impressionist, post-impressionist, and modern art in Philadelphia, the work explores the relationship between the African American writer, philosopher, and cultural critic Alain Locke and Barnes founder Albert C. Barnes. The work will be on view at the Barnes until September 4.

Once Again . . . (Statues Never Die) was the subject of a detailed August 11 feature story in The New Yorker, which hailed the video installation as a mesmerizing portrait of Locke as “a roving eye, determined to liberate the Black imagination through the alchemy of art. A five-channel black-and-white film follows Locke (played by André Holland, of Moonlight) through a series of vignettes that dramatize the complex entanglement of aesthetics and racecraft.”

The exhibition, Isaac Julien: Once Again … (Statues Never Die) delves deeply into the reasons why great African art deserves to be recognized on its own terms and not dismissed as “exotic,” or valued only as a “primitive” influence on Western artists including Picasso.

In the film, Julien stages an impassioned discussion between Barnes and Locke, drawing from their detailed writings. The talk turns into a conversation about influence, inclusion, and the power of African art.

Guiding the filmmakers and artists of the future

Julien has divided his time between London and Santa Cruz since he started teaching at UCSC in 2019. The invitation came at an opportune time for him and Nash.

“We wouldn’t have to be in Brexit Britain,” he said. “We could escape from time to time. I didn’t realize we were going right into the frying pan when 2020 came about.” 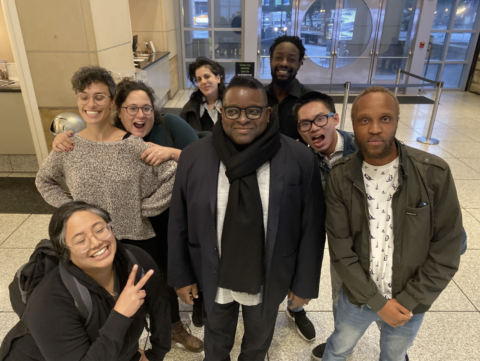 This ended up being a tumultuous time on campus and in the United States, with pandemic safety concerns, virtual learning, political turmoil, and even a devastating wildfire that forced an evacuation of campus.

“That was an interesting time,” he said with characteristic understatement.

Julien and Nash are planning to teach a course that will include a strong focus on research, and will likely involve a class trip to Los Angeles to attend the Academy Museum of Motion Pictures’ Regeneration: Black Cinema 1898–1971, the first exhibition of its kind, exploring the achievements and challenges of Black filmmakers in the United States through the civil rights movement.

Julien is showing his three-screen 2003 work, Baltimore, at the Academy Museum of Motion Pictures starting on August 17 and on view for six months, in conjunction with Regeneration. The exhibition will culminate with a showing of the late filmmaker Melvin Van Peebles’s work. Baltimore will be shown in the Warner Brothers Gallery, in an homage to Peebles, who stars in the piece.

While teaching at UCSC, Julien supports students and their projects, and creates a space for them to find their voices.

Julien spoke of students who have influenced his own work.

“We have one student in particular who is in music, who has been incredibly dynamic in relation to the lab and his research,” he said, referring to Joseph Finkel, the Ph.D. student studying musicology at UCSC.

“It really impacted on my own research, and I hope vice versa.” Julien said Finkel’s work influenced the sonic landscape of Once Again … (Statues Never Die).

“Working with Isaac Julien and Mark Nash has been a highlight for me as a Ph.D. student in the arts,” Finkel said. “The lab is a space where I have been able to learn new musical technologies and realize musical scores I have unearthed because of my research. Isaac and his workshop have helped me shape my work as an aspiring musicologist and rediscover the improviser and performer I have always been.”

Being back in Santa Cruz rejuvenates him, Julien said, and not just because it allows him to make frequent trips to cultural institutions in Los Angeles, which he describes as having “the most dynamic and interesting art scene in the U.S., perhaps.”

He also thinks of Santa Cruz as “a counterspace to London. I have time for reflection. I have so many conversations and dialogues that I can’t have in London.”