The quiet quest for quantum

Scientists at UC Santa Cruz are modeling, creating, and testing new materials that could one day be used to build powerful, energy-efficient quantum computers.

In recent decades, the power, speed and energy efficiency of computers has improved by leaps and bounds. The emergence of new technological platforms has helped researchers better handle the huge amounts of data being generated in fields from physics and genomics to finance and cybersecurity. But the capabilities of these devices pale in comparison to what researchers envision is eventually possible—not with larger versions of conventional computers, but with an entirely new breed of machine: quantum computers.

Conventional computers store information in binary bits; a transistor, for instance, can be either closed or open, on or off, a one or a zero. Quantum computers, however, aim to encode data in quantum bits (qubits) which can not only represent one or zero, but also a strange state of superposition that encompasses both options at once. Scientists agree that, thanks to this quantum state, computers containing qubits can solve certain types of problems exponentially faster than classical computers, which use traditional bits. But building a quantum computer that has massive numbers of stable, long-lasting, interconnected qubits is a challenge. 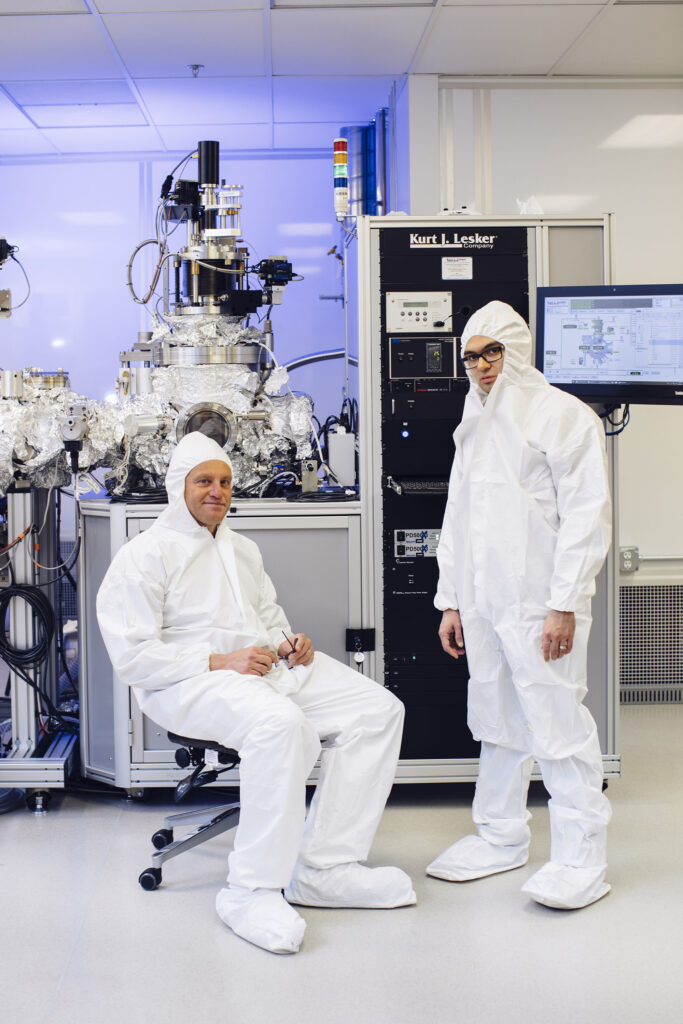 David Lederman (left), UCSC professor of physics and director of the Materials Science & Engineering Initiative, with Jairo Velasco Jr., a UCSC associate professor of physics, in the clean room facility at the UCSC Westside Research Park (Photo by Elena Zhukova)

Researchers worldwide are trying to figure it out. This fall, the Nobel Prize in Physics went to three researchers whose work revolved around quantum entanglement, the ability of two particles to behave like a single unit and collectively store information, even when physically separated. But this kind of basic research is just a starting place for the development of quantum devices.

At UC Santa Cruz, physicists and engineers are collaborating to model, create, and test materials that could one day act as the physical building blocks of quantum computers, sensors, and communication platforms. Countless types of atoms and particles can take on quantum properties and act as qubits under the right conditions. The work at UCSC helps narrow down this unwieldy list to a few feasible possibilities and sketch out their ideal applications.

“There is a very strong fundamental quantum materials effort going on at Santa Cruz right now,” said David Lederman, UCSC professor of physics and director of the Materials Science & Engineering Initiative. “We have computational scientists giving us guidance as to what are the most interesting materials to synthesize, materials engineers making these, and our experimentalists testing and measuring how they actually perform.”

Today, scientists have a relatively good understanding of how to make a variety of quantum materials. One option: a stiff, repetitive lattice of molecules containing occasional defects—in the form of other atoms, subatomic particles, or photons. These defects, isolated in the middle of the tight structure, can act as qubits, able to assume a state of superposition. However, their quantum properties often only emerge at very low temperatures or don’t last very long. Mere milliseconds or seconds after information is gained and encoded, it can be lost again—an exasperating phenomenon known as decoherence. The longest reported coherence for a quantum computer is currently 40 seconds.

“There are quantum computers out there, but right now they’re not very scalable, they often only work at extremely low temperatures, and they still have very limited coherence time,” said UCSC Associate Professor of Chemistry Yuan Ping.

Ping is among the researchers trying to solve these challenges. Over the last decade, she’s built a portfolio of modeling methods to predict the quantum properties of different combinations of materials under different conditions. Her initial models are from “first principles,” meaning they don’t require any experimental data; she and her colleagues simulate how atoms and molecules behave entirely through computation, using the basic rules of quantum mechanics. Their results help point toward which materials are most promising for quantum devices, with longer coherence times and quantum properties near room temperature.

“There are so many parameters you can vary in these materials, it would take you a lifetime if you wanted to blindly test every possible combination,” said Lederman. “That’s why having the computation part to guide us is so important.”

This summer, Ping and a team of scientists at Purdue University showed how the central nuclei of atoms can act as qubits when embedded in an ultrathin, honeycomb-shaped grid of boron nitride. Her models provided her collaborators with the critical physical parameters that control the qubits so that they could design and test them.

“My predictions can save a lot of experimental time,” said Ping. “I can tell you the spintronic, electronic, optical, and mechanical properties associated with a material before you ever make it.”

Of course, Ping’s models can’t rely on first-principle calculations to predict every aspect of a material’s functionality. That’s where experimentalists like Jairo Velasco Jr., a UCSC associate professor of physics, come in. Velasco’s lab houses a scanning tunneling microscope (STM), which uses a minuscule metal needle to sense electrons on the surface of a material. This probing lets researchers visualize how electrons behave inside the material—a physical readout of their quantum properties.

Velasco currently focuses on understanding the properties of graphene—unimaginably thin layers of carbon, just one atom thick. Extremely thin materials like this, often called 2D materials, are attractive for quantum information science because qubits trapped in their midst are so accessible— easy to manipulate or measure from the outside. 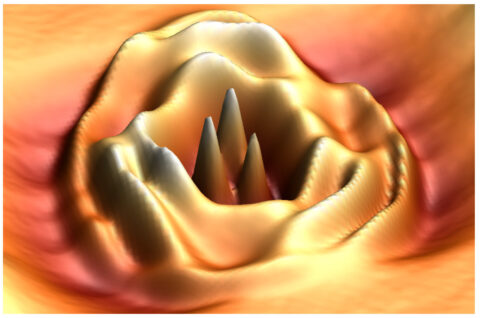 In 2020, Velasco used the STM to study electrons trapped in bilayer graphene—a double sheet of graphene, two carbon atoms thick. Under particular circumstances, a voltage applied with the STM tip creates an electric fence to corral electrons in place inside the graphene. These trapped electrons can function as qubits. More recently, Velasco carried out similar characterizations of trilayer graphene, three carbon atoms thick.

“This was completely uncharted territory,” said Velasco. “And what we found is that the electrons in trilayer graphene behave in a very unique way.”

In this work, published in 2021, he reported that the trapped charges in trilayer graphene were much more sensitive to changes in magnetic fields than their bilayer counterparts. This finding was surprising and poises trilayer graphene as a viable platform for future quantum technologies. The trilayer material could be particularly useful in quantum sensors, an application where scientists want qubits that react easily to minor perturbations in their surroundings.

“There’s not going to be one right answer; there are so many materials one can play with,” said Velasco. “It’s like an artist’s palette and, depending on what your application is, you choose different materials.”

A dead end for one quantum platform?

Magnetic materials are already ubiquitous in electronic devices, from audio speakers to MRI scanners. Typically, magnets that don’t conduct electricity align their spins in regular patterns. Researchers have theorized, however, that some magnets exhibit a distinct state of matter called a quantum spin liquid (QSL). In a QSL, spins aren’t ordered but instead display quantum fluctuations. Although QSLs aren’t actually a liquid, the difference between the way spins behave in a typical magnet and a QSL is similar to the difference between molecules in solids and liquids.

Possible states of magnetic moments, or spins, in magnetic systems. The spins may order in a regular pattern, for example, with all spins pointing in the same direction [(a) a ferromagnetic state] or with antiparallel neighboring spins [(b) an antiferromagnetic state]. Alternatively, the spins may never order and exhibit strong quantum fluctuations (c), forming a liquid-like state called a quantum spin liquid (QSL). (Image courtesy Sergey Syzranov)

Apart from being fundamentally interesting, QSLs also have potential for use in quantum computers because they can store information within a large number of spins simultaneously. Compared to other qubits, this kind of “topological material” is more protected from decoherence.

“If information is stored in individual spins, they can lose data in a matter of milliseconds due to random fluctuations,” said Syzranov. “But with topological qubits, we’re storing the data in this large collective state and it’s more protected from small, local changes.” 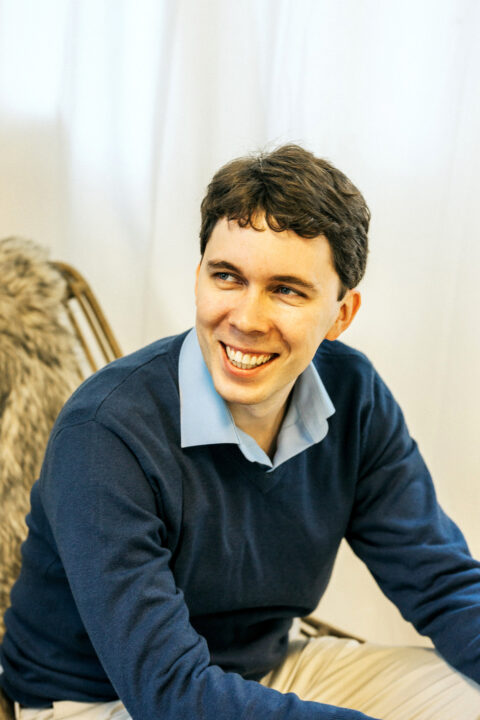 However, in a paper published in early 2022, Ramirez and Syzranov concluded, with a combination of experimental and theoretical work, that quantum spin liquids most likely won’t work. In the class of material that’s been considered most promising for QSLs, disorder—the impurities and irregularities found in all realistic materials—causes spins to freeze in place in random patterns rather than form QSLs.

Ramirez and Syzranov said their findings may signal a dead end for quantum spin liquids in one broad class of materials—but also might instigate a push for a better understanding of disorder, which would be a step forward for the whole field.

“Neither experimentalists nor theorists have been paying enough attention to disorder,” said Ramirez. “But you can’t take any crystal—even a beautiful, perfect-looking crystal—and assume that there’s no disorder in it.”

Their findings, they said, exemplify some of the strengths of quantum information science research at UCSC: outside-the-box thinking and tight interplay between different fields.

Over the last decade, the fervor to build quantum devices has grown exponentially. In May 2022, President Joe Biden signed two new directives promoting research in quantum information science. In 2022 alone, Ping has won awards totaling more than $2 million, including funding from the Department of Energy, the National Science Foundation Faculty Early Career Development Program, and an Alfred P. Sloan Research Fellowship. The speed of her research, she says, is moving faster than ever, and the new funding will support her group as it develops unprecedented computational capabilities to study and discover quantum materials.

“We can do a lot of things that we couldn’t do 10 years ago,” says Ping. “Just the progress in computing power has given us the ability to carry out computation much faster.”

At UCSC, the new attention to quantum science is helping recruit faculty members like Ping, and strengthening collaborations among physicists, chemists, and materials engineers.

“It’s an exciting time to be in this field,” says Velasco. “We have this neat duality where we’re studying core, fundamental physics, but there are also really interesting applications.”

Those applications—particularly quantum computers that change everyday computing—may be a far-off reality, but at UCSC and elsewhere, fundamental science is contributing to the development of materials that will one day build these devices.

Sarah C. P. Williams, a graduate of the UC Santa Cruz Science Communication Program, is an award-winning science writer who explores the stories behind scientific inquiry and discovery for institutions and publications around the world.