Public health and human services professional Berta Campos-Anicetti (Crown ’89, biology) was instrumental in helping to get the Latine community in Novato, Calif., vaccinated during the pandemic, among many other successful programs

There’s no bigger success for a public health professional than preventing a problem so effectively that your services are no longer needed.

That’s what Berta Campos-Anicetti accomplished with the teen pregnancy prevention program she organized for Novato-based North Marin Community Services (NCMS). The program reduced Latine teen pregnancies in Novato from 36 per year to just 6 in 14 years, when it closed. (Campos-Anicetti prefers the gender-neutral term Latine.)

Campos-Anicetti, the director of Latine Services for NMCS, said the key to her success was convincing traditional Latine parents to allow the organization to teach their kids about sex. It wasn’t easy, and took a lot of patience to hold meetings and explain the troubling statistics. 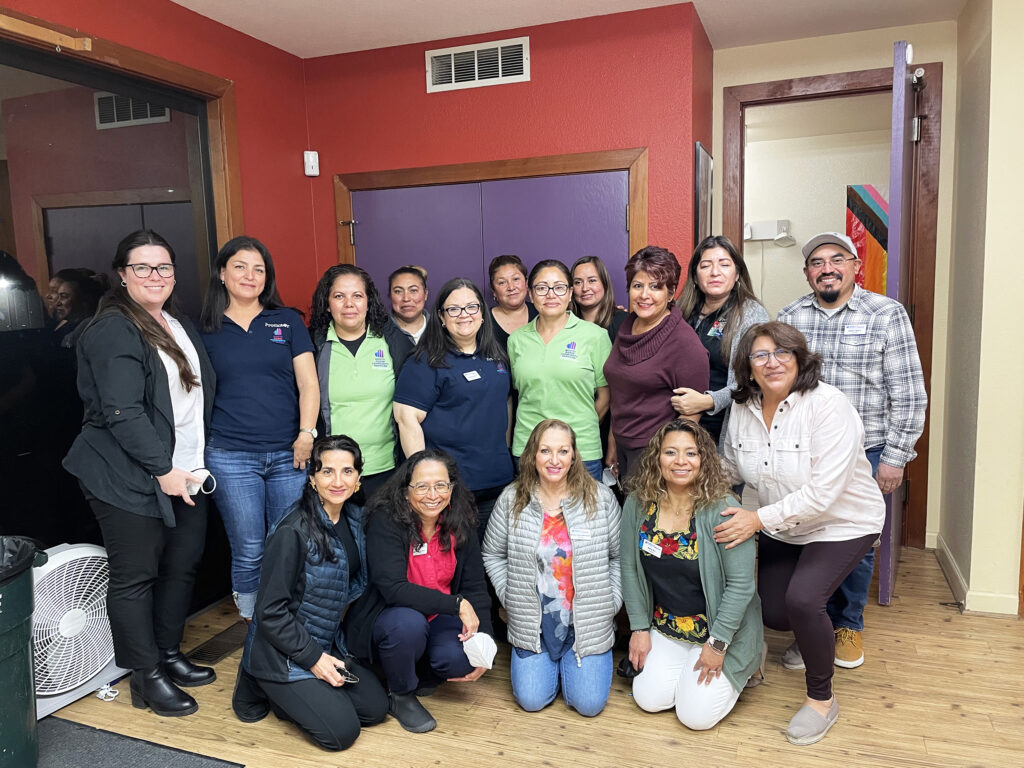 The program attracted kids to its after-school classes with raffle cards and promises of field trips.

“The reason why a lot of kids were interested in early sexuality was they were bored stiff and had nothing else to do,” Campos-Anicetti said.

Campos-Anicetti was also instrumental in helping get the Latine community in Novato vaccinated with COVID-19 shots during the pandemic. She is proud of this because Latine residents were hit the hardest—many had to keep working through the shutdowns and didn’t have jobs that they could do from home. Campos-Anicetti appeared on Spanish-language posters urging people to get vaccinated.

She is also proud of organizing Promotores, a program for 21 Spanish-speaking volunteers to share community resources with Latine residents on substance abuse, mental health, and more. Beatriz Garcia, who is a promotora, said Campos-Anicetti is an inspiration.

A native of El Salvador, Campos-Anicetti fled from war and immigrated to the United States when she was a senior in high school. She then went to community college in San Francisco while working and helping her parents, who needed her to translate Spanish to English for them to manage their daily lives.

After four years at City College, she transferred to UC Santa Cruz, making the 150-mile round trip commute from San Francisco once a week on buses and trains. The entire time, she continued to work in San Francisco so she could help support her parents.

“I went to UC Santa Cruz for three years, and I only went to the beach twice,” she said. “There was no time.”

Many times, she felt like quitting, but she kept going in large part because of the encouragement of Elba Sanchez (Merrill ’80, Latin American studies; M.A. ’83, literature), former UC Santa Cruz Spanish for Spanish Speakers director.

“Elba was always there to hear me,” she said, adding that Sanchez would help her make a plan and get organized.

Sanchez, who was altar server in Campos-Anicetti’s wedding, introduced her to UCSC’s multicultural-focused Oakes College.

“When I needed warmth and culture, I would hang out there,” Campos-Anicetti said.

Campos-Anicetti plans to retire this year along with her husband. It’s sooner than she had planned, but her views changed after a bout with breast cancer.

She is looking forward to continuing to pursue her passion, Zumba dancing, and newfound hobby, bicycling. The couple took a bike trip in September on the Chesapeake & Ohio Canal trail.