There’s not much of a view from Timothy James Young’s cell on San Quentin’s death row: just metal screens, bars, and beige walls.

But, thanks to an art installation on the UC Santa Cruz campus, the 49-year-old Young says he now imagines a view that includes the blue sweep of the Monterey Bay along with a garden of roses, honeysuckle, kale, and Brussels sprouts.

His changed viewpoint is one outgrowth of an 18-month project around art and incarceration undertaken by UC Santa Cruz’s Institute of the Arts and Sciences. Titled “Barring Freedom,” the project will include lectures, exhibits, and films, along with a 2020 symposium centering on mass incarceration and racial injustice in the prison system. Perhaps most strikingly, it also includes a participatory art piece called “Solitary Garden” that now sits on the side of an oak-studded hill on campus.

The piece is 6 feet by 9 feet, the dimensions of a standard U.S. solitary confinement cell. A metal block represents a bed, while smaller blocks mark where a combination toilet/sink and a desk and chair would be. There’s hardly enough space between them to bend over without knocking into something. A stark set of aluminum bars frames the bay, with a small garden planted around the edges.

The UC Santa Cruz installation is one of 17 of these Solitary Gardens scattered around the country. Each “cell” is landscaped by a prisoner in solitary confinement as a way to illustrate what many say is the inhumanity of the U.S. prison system, especially around the use of isolation cells, and the need for reform or abolition. For two growing seasons, volunteers plant and tend the flowers and vegetables the prisoner has chosen, exchanging letters and photographs with the incarcerated man or woman. 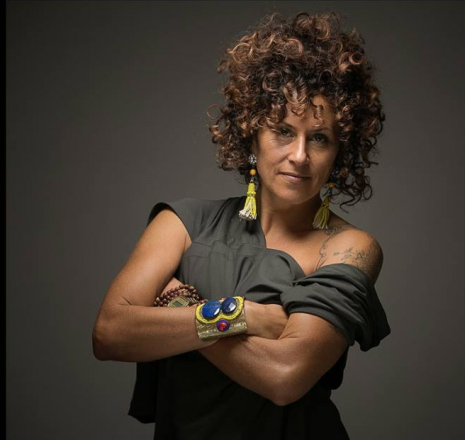 Behind these installations, including the one at UC Santa Cruz, is a 46-year-old New Orleans artist named jackie sumell (she uses lowercase for her name). She started the garden project because of a 12-year friendship with a man named Herman Wallace, who spent 41 years in solitary confinement in Angola prison before he died in 2013 at the age of 71.

According to a 2017 report from the Bureau of Justice Statistics, some 1.5 million people were in state and federal prisons in 2017. sumell says an estimated 61,000 of them are held in isolation.

“Solitary Gardens,” she says in a documentary about her art and activism, “become portraits of those buried farthest in our carceral institutions.”

sumell is in a hurry. She’s wrapping up a semester at Michigan State University in East Lansing, where she has a critical race studies fellowship and there are students to meet and projects to finish. Still, she manages to clear her schedule for a short time to chat over the phone about Wallace and the UC Santa Cruz project.

She says she was an M.F.A. student at Stanford University when she heard a talk by Robert King, who’d spent 29 years of his 31-year sentence in solitary confinement at Angola, a plantation-turned-prison in Louisiana, before his murder charge was overturned on appeal. She went up to King after the talk and asked what she could do. He suggested writing to two other members of the so-called Angola Three besides himself: Herman Wallace and Albert Woodfox. Both had been active in the Black Panther Party before they were sent to solitary following their convictions on charges of killing a prison guard. They also filed a civil lawsuit challenging the growing use and inhumane treatment of prisoners in solitary confinement.

sumell spent one day taking a photo of each hour of her life and mailed them to Wallace along with a letter.

“Here are 24 hours in my simple life. I can’t imagine yours,” she wrote.

Eventually, they would exchange more than 300 missives.

One day, sumell says, a professor assigned her class at Stanford to each interview a faculty member about their house—an assignment sumell called “absurd”—and so she asked Wallace if he would do it instead.

From his cramped cell, Wallace sent sumell drawings of his dream home, a 3,400-square-foot, two-story house with a wrap-around porch, a yellow kitchen, pecan cabinets, and a master bedroom with a mirrored ceiling. He wanted a pool in the backyard with a light-green bottom and the image of a large black panther in the middle, and included a garden with three square beds filled with gardenias, carnations, and tulips.

“I would like for guests to be able to smile and walk through flowers all year long,” Wallace wrote.

Architects who saw Wallace’s plans later noted its resemblance to a prison with small bedrooms off a long hallway and some rooms without windows. There was even an escape tunnel designed to look like a drainage pipe.

But what sumell saw was possibilities. She would turn the project into a statement about the inhumanity of Wallace’s situation.

She built a small mockup of the house and then a full-sized wooden replica of Wallace’s cell. The two pieces became the center of an art exhibition titled “The House that Herman Built.” It toured more than a dozen countries. A documentary film called Herman’s House was made about the project.

According to sumell, Wallace changed her life.

She moved to New Orleans so she could visit him and went on a years-long quest to find a plot of land where she could erect Herman’s house, although it is still not built. She also began advocating for the abolition of the U.S. prison system in favor of a more redemptive model where a person’s mistakes didn’t define them for the rest of their lives, she says. 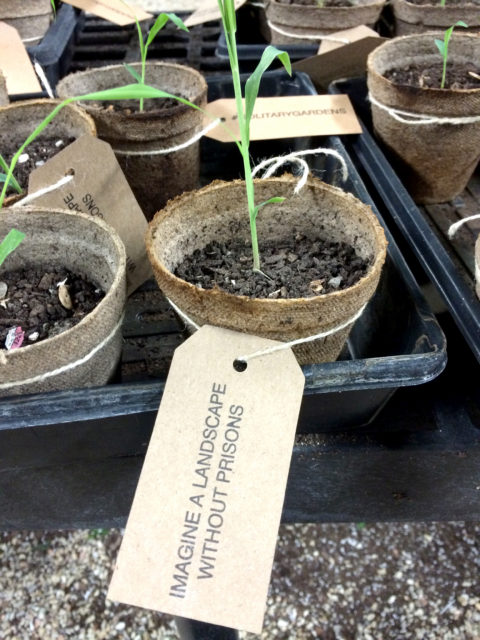 In 2013, Wallace was released from prison and died of liver cancer three days later. sumell laid out her first Solitary Garden in the Lower Ninth Ward in New Orleans a year after. Her idea was to create footprints of solitary confinement cells out of mortar laced with chattel slavery crops—cotton, tobacco, indigo, and sugar cane—with gardens designed by inmates planted in the negative space.

“In order to honor Herman’s legacy, I needed to grow things: hope and possibilities and promise,” sumell says. “That’s the birth of this project.”

Her voice breaks when asked about her relationship with Wallace. “I’m so grateful to him for everything. He gave me an expansive purpose in this lifetime because he was able to love from this unimaginable perspective.”

Love, she says, is what fuels her work.

“It is a blessing to be part of something so spectacular.” — Timothy James Young 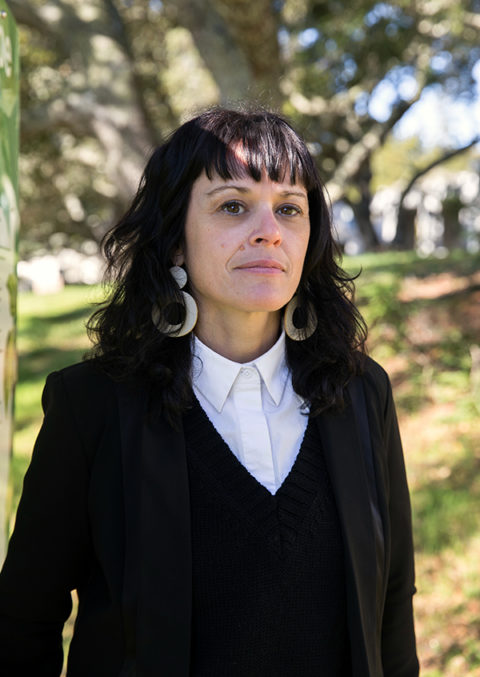 Rachel Nelson, interim director of the Institute of the Arts and Sciences (photo by C. Lagattuta)

For Rachel Nelson (Ph.D. ’16, visual studies), interim director of UC Santa Cruz’s Institute of the Arts and Sciences, doing a project around prison reform, racial injustice, and mass incarceration made sense on a campus known not only for its activism but also for its research on prison topics.

Faculty and students at UC Santa Cruz, for instance, were instrumental in founding the Critical Resistance movement, including History of Consciousness Professor Emerita Angela Davis, Nelson says. Critical Resistance is a nonprofit organization that advocates for prison abolition and better conditions inside prison walls.

Longtime prison abolitionist Gina Dent, associate professor of feminist studies, is also on campus, and Nelson says she has centered some of her research around the topic.

“I was interested in how art can make visible, or reintroduce us to, things we already know but manage not to see,” Nelson says. “To the conditions with which we dehumanize people.”

She walks through a grey drizzle to the installation, which is surrounded by a garden of bamboo, roses, and rosemary. Kale was planted because Young wrote that he’d never eaten the vegetable but that “as I get older and wiser, it is just something that my body craves for.” He asked for Swiss chard, pumpkins, and Brussels sprouts, which he hated as a kid but now would like to taste again. At some point he wants honeysuckle to bloom.

The juxtaposition between the cell and the view is breathtaking. 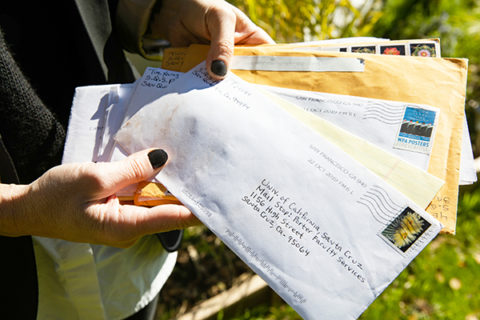 Barring Freedom co-curator Alexandra Moore (a graduate student in history of art and visual culture) and undergrad intern Jocelyn Lopez-Anleu (Stevenson ’20, history of art and visual culture) are organizing the letter-writing part of the garden project. Nelson says students have not only volunteered to work on the project—planting, writing letters to Young, archiving his writings—but they also seem reverential when they visit. She has seen them reading the artwork’s explanatory signs and standing quietly to look through the bars.

Nelson knew the power the art piece would have around prison reform but not about how it would also be so personal.

“Tim brings to this project something that makes us understand prison and how it works, but it’s also about one person,” she says, her voice cracking. “It has been incredibly and profoundly moving. I didn’t expect how we would give him a new and beautiful view.”

Information about Barring Freedom and its schedule of events.

The 18-month Barring Freedom project will include lectures, films, a traveling art exhibit along with a multi-day symposium titled “Visualizing Prison Abolition,” and an edited volume of essays and art from the conference. 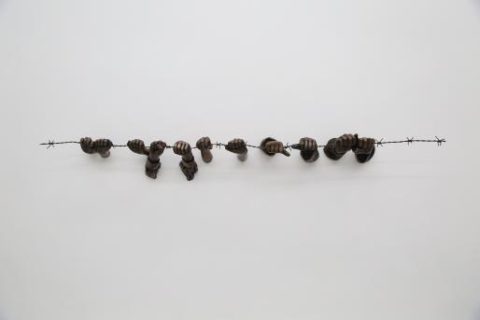 Hank Willis Thomas, If the Leader Only Knew, 2014

Organized by the Institute of the Arts and Sciences at UC Santa Cruz, the project will bring together artists, activists, and scholars to explore issues of mass incarceration, race, and the prison-industrial complex, and to imagine alternatives to the criminal justice system.

The symposium will be Oct. 15–17, 2020, in various locations. The traveling art exhibit opens in April at the John Jay College of Criminal Justice in New York City and will come to the San Jose Museum of Art and UC Santa Cruz Oct. 14.