Above: Portrait of Lou from last year. (Photo by Tommy Moore)

Lou Mathews discovered he was a writer during telephone lineman school. He was 19, newly married, and needed a job. He had trouble, however, trusting the spiked gaffs strapped to his boots while learning to climb poles. 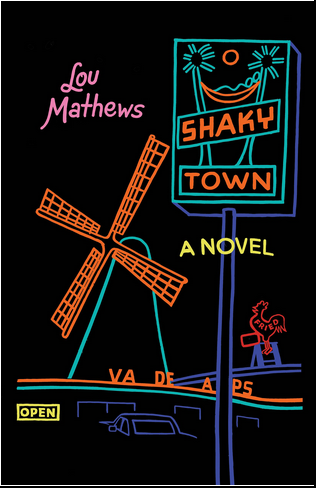 Lou Mathews’s latest book, Shaky Town. Pick up a copy from Tiger Van Books by clicking on the cover art above.

After sliding back to the ground several times, his instructor, a crusty guy from Georgia, asked Mathews if he was scared. When Mathews said he wasn’t, the man replied, “I’ll tell you, boy, you look scared to me. You’re shakin’ like a dog shittin’ peach pits.”

“If I had to point to a moment when I realized I would be a writer, it was then,” said Mathews, 75, from his home in the Beachwood Canyon neighborhood of L.A. “I was about to be fired and all I could think was: That’s a great line of dialogue.”

A longtime teacher of fiction writing for the UCLA Extension Writer’s Program, Mathews’s newest book, a collection of interconnected stories set in working-class Los Angeles titled Shaky Town, came out last year. It was longlisted for the 2022 Tournament of Books along with authors like Jonathan Franzen, Ruth Ozeki, and Anthony Doerr. His short stories also have appeared in more than 40 magazines, anthologies, and textbooks. 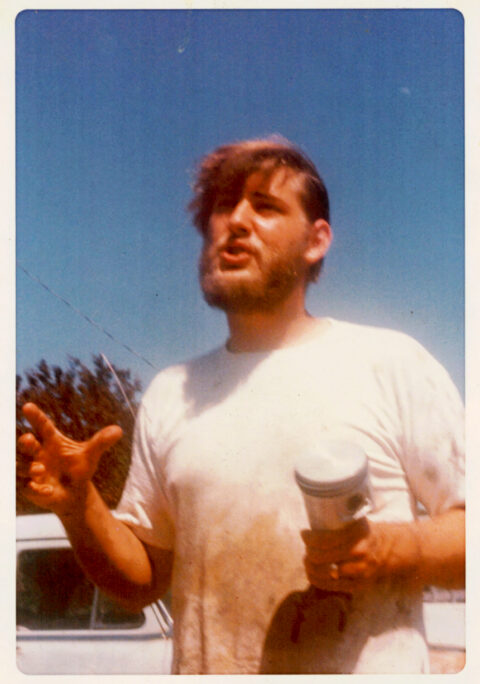 An early Polaroid from around 1973. Mathews is holding up the piston from a 1966 Dodge Dart that he was rebuilding for two local poets, Mary Norbert Korte (a former Catholic nun) and Peter Veblen, who’d run the car without oil for three months. The car is still running.

Yet it only takes one conversation with the bearded Mathews to realize the potent storyteller he is. He has an encyclopedic memory, an uncanny attention to detail. He’ll tell you about the rumors, for instance, that then–College Five (which was named Porter College in 1981) was almost named Hitchcock College after the famed movie director. He’ll describe how he helped a newly sober Raymond Carver—the famed poet and short-story writer—to teach at the UC Santa Cruz Summer Writers Series he ran. (“We got Ray for two weeks for the price of a cafeteria card and a dorm room. He had nowhere else to go.”) Ask about his 11 years in Santa Cruz and he’ll describe a vibrant literary scene filled with UC Santa Cruz faculty like Carter Wilson, David Swanger, and Annie Steinhardt; three bookstores; four literary magazines; a full weekly calendar of readings; and his days as fiction editor for Sundaze, an independent weekly.

He worked variously in his life as a mechanic, a library page, a sportswriter, a linguica fryer at the Watsonville Speedway, a warehouseman, a baker, an employment counselor, and an illegal-street-racing gambler who learned how to beat the odds well enough to pay the rent (the subject of his first novel, L.A. Breakdown). All of which, along with his roots in gritty L.A. neighborhoods with names like Frogtown and Toonerville, helped give birth to the stories in his new novel.

“This is where I grew up and how I grew up,” he said of the characters who people his book set in a fictional part of East L.A. in the 1980s. “Nobody was writing about that. We weren’t suitable subjects for literature, but I didn’t know that so I started writing stories.”

While New York publishing houses didn’t quite know what to do with a book that explored the unvarnished reality of Southern California life, Mathews said, a former UCLA Extension writing student, Jim Gavin, who created the AMC series Lodge 49, started Tiger Van Books and made Shaky Town the house’s first novel.

You may not know Lou Mathews, photographed in his Beachwood Canyon Home, but every writer in Los Angeles does, from Aimee Bender to Dana Johnson | Photo by Myung J. Chun / Los Angeles Times

“The reason you write is to remember the pleasure you had when you got it right, for when you nailed it,” Mathews said. “A good sentence, a good paragraph, a good page. Perhaps even a good story. What keeps you going is that memory of when you looked at a page you’d just written and thought: Damn, I got it.”