NextOpening doors for those in need
Alumni profiles

Katie Morrow learned resilience, flexibility, and the importance of education while growing up in the Santa Cruz Mountains.

Raised by a single mom, the masseuse and psychologist Suzanne Morrow, she spent a lot of time doing campouts, visiting friends, and digging for crystals near Lake Tahoe. It was a freewheeling time of adventure and learning by doing.

​“My mom had to work a lot of the time and could not afford child care, so I was either with her while she had appointments, at home by myself, or at friends’ houses. We just sort of patched it together,” Morrow said.

Though money was scarce, education was a high priority in her family.

“There was always an idea that I could get through college even if I could not afford it,” Morrow recalled. “I knew there would be financial aid and scholarships available.”

Now Morrow has imparted those life lessons about flexibility, making do with few resources, and celebrating the power of learning into Limitless Horizons Ixil, a nonprofit organization she cofounded in 2004.

The organization creates new opportunities for Indigenous youth, women, and families of poverty-stricken Chajul, Guatemala—which was devastated by the country’s 36-year civil war—by providing workshops, scholarships, and tutoring. The nonprofit also opened Chajul’s first community library, and early this year will embark on its biggest venture yet, opening a one-of-a-kind secondary school for Chajul.

The new school is designed for Indigenous girls, providing focused instruction that will be academically empowering, safe, and sensitive to the needs of the girls. The school will include youth development, mentoring, and family programs, developing the next generation of female leaders in Chajul.

Limitless Horizons Ixil instills a culture of learning in Chajul by offering academic and professional skills community members need to change their lives in an isolated and war-torn region. The organization wants to prevent the community from losing its vital youth population from immigration to the United States and other countries.

The nonprofit also addresses gender disparities in an area where women, according to tradition, are expected to curtail their educational opportunities and work to serve men. 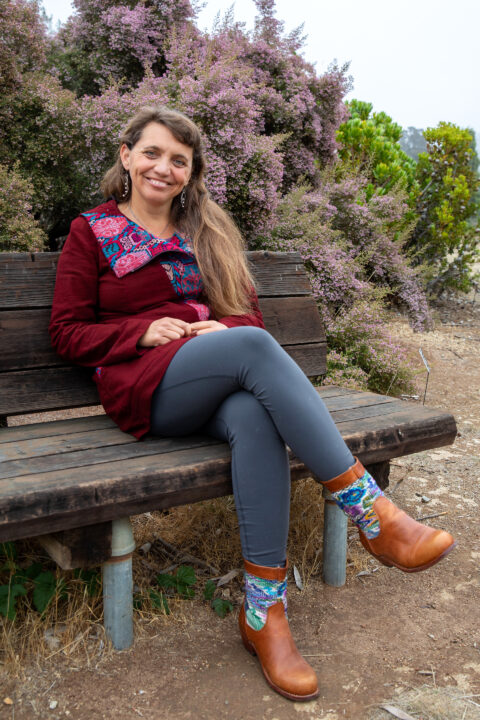 After earning her master’s degree in social work from San Jose State University, Morrow traveled to Central America in what turned out to be the most consequential journey of her life so far.

Morrow’s travels took her to Chajul, at the foot of the steep, green Sierra de los Cuchumatanes mountains, the highest nonvolcanic slopes in Central America. She went there at the invitation of Pedro Caba Asicona, her one-time Spanish teacher and a native of Chajul.

Asicona wanted Morrow to meet his family and see the poor conditions in his isolated village, with its large Indigenous population. But he also wanted her to witness the curiosity and indomitable spirit of the people and their potential to improve their circumstances.

The community was known for its vibrant market with women selling their wares while dressed in traditional colorful garments called huipils. The Indiginous inhabitants speak the Ixil language, spoken nowhere but in this part of Guatemala’s western highlands.

But the area was reeling from poverty and the aftermath of violence. Its Indigenous community was targeted by genocide during Guetamala’s devastating civil war, which lasted from 1960 to 1996.

At the time, Asicona was hoping to pay it forward. He was the first person from Chajul’s community of 48,000 people to graduate from a university.

“It was very clear that he got his educational opportunities from scholarships and outside support, and because he was a boy,” Morrow said. Now he wanted his people to have those resources, too.

Morrow and Asicona started small when they launched Limitless Horizons Ixil in 2004, beginning with a scholarship program for just 10 students. But thanks to their dedication and tenacity, and generous supporters, the nonprofit now has supported more than 200 Indigenous middle and high school youths in Chajul. Limitless Horizons Ixil runs a youth development program that will be incorporated into the school they’re currently finishing building, set to open this year, and continues to oversee the only library in Chajul.

When the first COVID-19 case was reported in Guatemala in March 2020, Limitless Horizons Ixil had to shutter its community library. Local schools also shut down. Learning opportunities became scarce. Meanwhile, the effects of the lockdown, and two hurricanes, left the community reeling.

Responding to the crisis, Limitless Horizons Ixil used every tool at its disposal to improve educational opportunities—even broadcasting bilingual teaching, holding science seminars on the radio and TV, and producing health videos to keep families safe during COVID.

Lately, Limitless Horizons Ixil has an increased profile because of a prestigious honor.

This past year, ​​the nonprofit won the 2021 UNESCO (United Nations Educational, Scientific and Cultural Organization) King Sejong Literacy Prize for its program, “Broadcasting Bilingual Stories: Promoting Interactive Literacy Programming in Rural Guatemala.” Limitless Horizons Ixil is one of six global laureates to receive the prize in honor of its innovative approach to literacy programming during COVID-19 in Chajul. The award was further celebrated shortly after, when Morrow met with local Congressmember Jimmy Panetta to receive a Certificate of Special Congressional Recognition.

Morrow wants to share the award with the organization’s Guatemalan staff and directors.

“They deserve so much recognition and support for how hard they worked and all they have achieved,” she said. “It is inspiring and humbling to see how far we’ve come.”