Opening doors for those in need

After a lifetime of service in the education field, alumnus Ernesto Ruiz pays it forward to help future students

Ernesto Ruiz (Crown ’75, anthropology and education) and his husband, Steve McHenry, have established the Ruiz-McHenry Endowment at UC Santa Cruz. When realized, this future endowment will benefit the Educational Opportunity Programs (EOP). Ruiz and McHenry are thrilled to support the EOP’s goal of increasing and supporting outreach, enrollment, and graduation efforts for students from low-income backgrounds and students of color.

“There are many individuals that mentored and opened doors of opportunity for me. This is one way I wish to ‘pay it forward’ and assist UCSC in its efforts to help students, including ones from educationally disadvantaged home environments and ones with migrant/farmworker backgrounds,” said Ruiz.

He hopes his foresight will help provide academic support and increase the number of financially challenged Latino students who graduate from UCSC.

When Ruiz enrolled at UCSC in 1971, he was the first of 11 siblings from his Latino farmworker family to attend a four-year university.

“My father expected me to join the labor market after high school and help support the family. My two oldest siblings did not attend high school for this reason,” Ruiz said. “Mom understood the value of education and that higher education was a ticket out of farmwork and meager wages. She encouraged me to study hard and not to worry about the family finances.”

His mother praised him for his academic accomplishments and was proud he was interested in attending college.

He fondly remembers EOP staff welcoming a bus full of Latino students from the Central Valley to the UCSC campus in the summer of 1971.

​“They fed us, introduced us to campus life, and helped us navigate financial aid and course selections. They also instilled in us the ‘yo puedo’ [‘I can’] mentality,” Ruiz said.

Throughout his time at UCSC, when faced with academic or personal challenges, he sought out EOP staff.

“Talking to and being helped by someone who looked like me and understood my background was enormous,” said Ruiz.

In 1975, Ruiz graduated from UCSC with a double major in anthropology and education.

“The university’s academic rigor prepared me for graduate school and for my professional career,” he said.

He earned a master’s degree in education and a bilingual/cross-cultural credential at California State University, Sacramento (CSUS), in 1976. He returned to CSUS and received his administrative credential in 1980.

While at UCSC, one of his professors, anthropology and education professor Gini Matute-Bianchi (now emerita), believed that Ruiz was a candidate for a doctoral degree and urged him to set that as a future goal. He recalls her saying, “Ernesto, the number of Latinos holding doctoral degrees is abysmal; help change that statistic.” He took her message to heart and earned a doctorate in educational leadership at the University of the Pacific in 1995.

A career devoted to education

Ruiz dedicated his professional career to education and to helping those similar to him—particularly children of migrant/farmworker families—succeed in school and pursue higher education. He started his teaching career as a fourth- and fifth-grade bilingual teacher in San Jose in 1976 and then taught primary grades in Dixon, Calif. 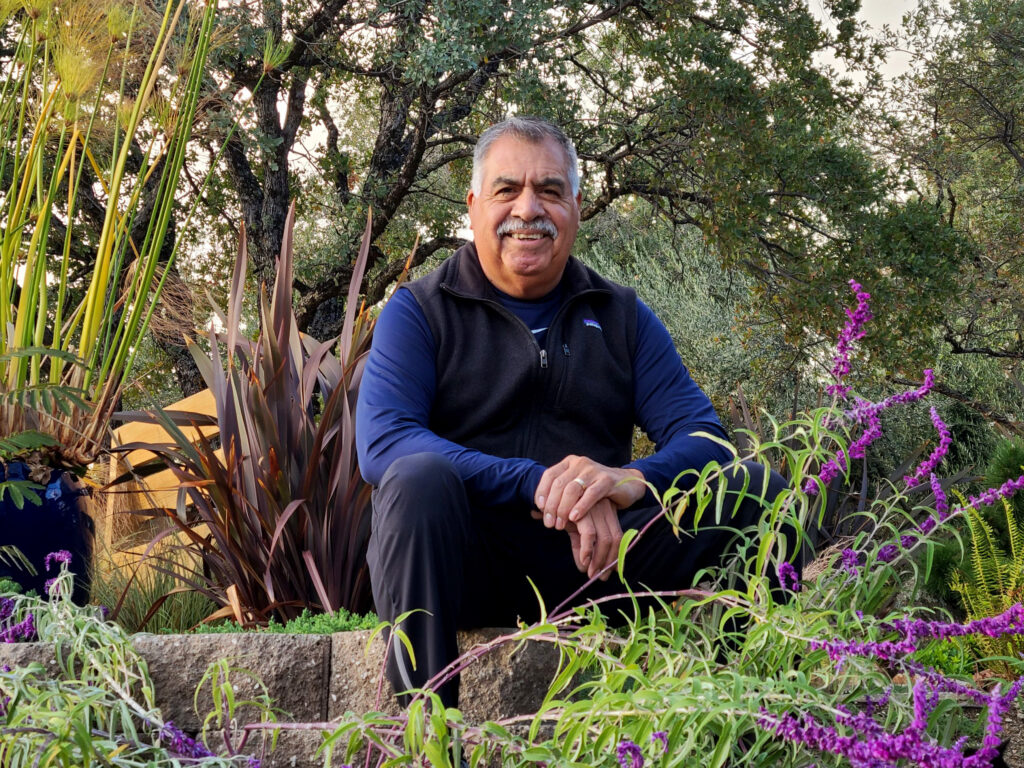 Over the next 35 years, he held various teaching and administrative positions with the Butte County Office of Education-Migrant Education Program (BCOE-MEP) including those of resource teacher, summer school principal, associate director, and assistant superintendent. Under his leadership, the BCOE-MEP became renowned nationwide for its development and implementation of numerous innovative and successful instructional, professional development, and parent education initiatives and programs. These include the Migrant Teacher Trainer Institute, Reading Recovery, First Teacher, Parents as Trainers Program, Migrant Education Advisor Program, and the Youth Leadership Academies.

In line with his goal of increasing college attendance rates for migrant students, Ruiz and his staff developed partnerships with more than 15 institutions of higher education including UC Davis, UC Berkeley, Stanford University, and the University of the Pacific. Through these partnerships, more than 1,500 middle and secondary students attended summer school programs on college campuses. Eventually, many of these students enrolled and graduated from these colleges.

In 2005–10, Ruiz served as the administrator for the Migrant, Indian, and International Office at the California Department of Education (CDE). In this role, he oversaw the funding, administration, and evaluation of 24 Migrant Education Regional Programs, seven Migrant Education statewide contracts, 27 American Indian Centers, and teacher exchange memoranda with Spain and Mexico. Under his leadership, the CDE published the first Comprehensive Needs Assessment and the second State Plan for the Migrant Education Program and the first set of regulations for the American Indian Program.

In 2010 he returned to the BCOE for three years—until his retirement—administering the California Mini-Corps Program, which he calls “a program dear to my heart.” Ruiz states: “I started my career in education through the Mini-Corps Program while at UCSC. The Mini-Corps Program recruits undergraduate students from farmworker/migrant backgrounds who are interested in careers in education. They provide tutorial services to migrant students under the direction of a master teacher. Thus, being able to serve as state director for this program brought me around full circle, a wonderful capstone in my 40 years in education.”

Inspiring others to pursue higher education

During his professional career, Ruiz served on several state and national education councils and advisory boards, including the California Superintendent’s Ethnic Advisory Committee, the Interstate Migrant Education Council, and the National Association of State Directors of Migrant Education.

“I chose education as my profession, and particularly migrant education, because I understand the importance of education. Education was, and hopefully still is, the great equalizer,” Ruiz said. “I know the importance of role models and the successes that come from creating educational opportunities for Latino and other minority students. I believe I serve as a role model for these students. I am certain that UCSC will use the Ruiz-McHenry Endowment to further these goals. I also hope that my story inspires these students to pursue graduate and doctoral degrees.”

If you would like to discuss how you can improve the lives of future students by including the university in your estate plans, please contact the Office of Planned Giving at gift.planning@ucsc.edu or (831) 459-5227.