Above: Dr. MarkAlain Déry when he was a flight physician | Photo courtesy Dr. Dery

As an infectious disease specialist and epidemiologist, Dr. MarkAlain Déry has been at the forefront of far-reaching disasters and viral outbreaks: Hurricane Katrina in 2005, Haiti’s 2010 earthquake, the Ebola outbreak in West Africa in 2014–15. Then came 2020. 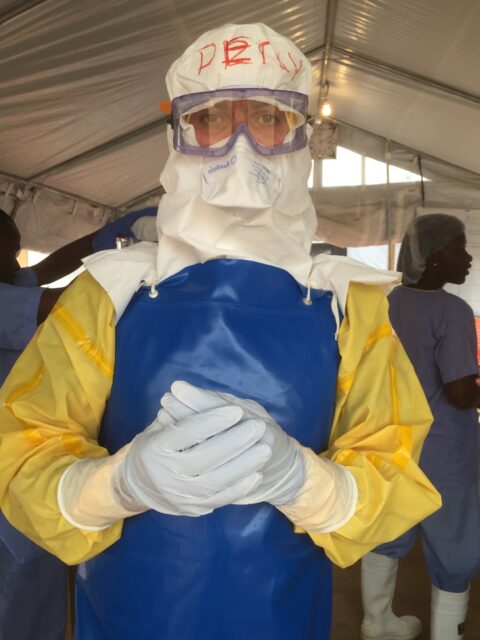 Dr. Dery in Freetown, Sierra Leone, responding to the Ebola outbreak in 2014–15; he worked for the World Health Organization as a clinical epidemiologist.

“I never thought I would skateboard—my main mode of transportation, cup of coffee in hand—to the country’s first federal COVID-19 testing site so I could treat people in a global emergency,” Déry said. “I’ve taken boats, elephants, and canoes to get to the most remote places to offer health care. But here, in New Orleans, is where the pandemic hit home for me, in its early days.”

The 53-year-old chief innovation officer and medical director at Access Health Louisiana has had his work cut out for him in the past year and a half. Aside from testing for the virus and promoting vaccinations, he’s also hosted a daily podcast and an animated video series called NoiseFilter, which looks at COVID-19 news through the filter of social, economic, and racial justice.

And just as he was doing before the pandemic, Déry works as an HIV and hepatitis C specialist, trying to combat discrimination and advocate for health care for all. He and his wife, Liana Elliott, are the founders of a community radio station, WHIV, dedicated to human rights and social justice. It’s a program of the New Orleans Society for Infectious Disease Awareness, a nonprofit Déry started in 2014 to raise awareness of HIV/AIDS in New Orleans, which had the nation’s highest rates of new HIV infection diagnoses. Before all this, though, he was a skateboarder at Kresge College. Born and raised in Los Angeles, he wasn’t sure what he’d do in college, but he found himself at UC Santa Cruz.

“I was there when the sea lions were converted to the banana slugs as the official mascot,” Déry said. “I thought UCSC was super cool and nurturing—exactly what I needed.”

He’d learned about empathy and compassion from his father, but it wasn’t until he dropped out of college after his second year and explored Europe and North Africa that he realized he wanted his life to have impact. He wanted to reverse how diseases affect certain groups of people and become a physician advocate. 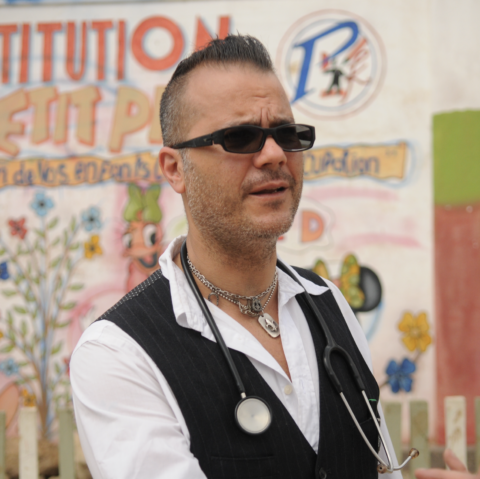 Dr. Dery in Haiti responding to the earthquake in 2010. He arrived three days after the catastrophe.

While in residency, Déry joined the MetroHealth Life Flight team and spent the next 10 years as a trauma physician. He worked in emergency rooms across the Navajo Nation reservation as part of his public health payback to the National Health Service Corps for giving him a full scholarship to attend medical school.

Today, in his free time, which he strives to make time for, Déry plays bass in three bands. He’s also writing a book about the history of discrimination in medicine and a graphic novel featuring trans and queer sex ed for teenagers.

He often welcomes students who visit him at his radio station, which he describes as a “force for good” in New Orleans.

“I started the radio station to promote justice and equity, and we accomplish that through music that addresses inequities and the real kind of talk not always heard in mainstream media,” he said. “Attending UCSC opened my eyes to the injustices of the world and gave me the building blocks for how to be a positive agent of change. I love when UC Santa Cruz students visit. I see them all as the future agents of change.”