NextFire, loss, and the embrace of community
Alumni profiles

Erick Melara, a second-year medical student at the Frank Netter School of Medicine at Quinnipiac University in Connecticut, is the son of Salvadoran immigrants and came late to the idea of becoming a doctor. So, when told he needed to do a capstone project as part of his medical studies, he decided to do a podcast called Behind the White Coat that would highlight underrepresented and low-income people who were in the medical field. The idea was to inspire high-schoolers who may not have had much exposure to careers in medicine.

It changed him, too.

“I think it’s important to tell stories,” said Melara from his boyhood home in Fresno, where he was hunkered down due to the COVID-19 pandemic. “These are things you really can’t learn in a textbook.” 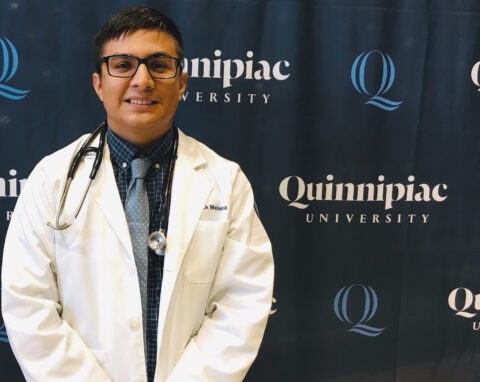 Naturally curious, a trait that initially brought him to the field of medicine, Melara has interviewed a wide variety of people—from an orphan who grew up with 11 other adopted brothers and sisters to become the first Black female lieutenant general in the history of the U.S. Army, to a Holocaust survivor who became a professor of psychiatry, to a medical student who is a member of the Pit River Tribe and was part of a social-media effort to raise awareness of Native American suicide and substance abuse.

Each of them, he said, has taught him lessons about leadership, about the pitfalls of labeling people, and about making assumptions about people based on the color of their skin or their socioeconomic background. He believes the lessons he’s learned and the inspiring people he’s met will make him a better physician.

Melara, now 27, arrived at UC Santa Cruz intending to be a physical therapist but a human physiology course taught by now-retired Molecular, Cell and Developmental Biology Lecturer Linda Ogren (Crown ’72, biology), sparked a kind of intellectual awakening and set him on a path toward medicine.

Deciding to take a year off before going to graduate school, he got two jobs. One was as a scholar/researcher at an anatomy lab at Stanford University and the other as a medical scribe in the busy emergency room at Good Samaritan hospital in San Jose.

“I would see someone come into the ER with a pontine hemorrhage and I would go back to the lab and ask the pathologist what was going on,” Melara recalled, “and the pathologist would show me the little vessels of the pons, which is part of the brain stem, and it just blew my mind.”

Driven by a desire to understand the human body and its processes even more, he developed a hunger for learning. He also couldn’t help but admire the way the overworked doctors in the ER would step into a stressful situation and calmly lead a team in the treatment of a patient.

He got a scholarship to Quinnipiac University’s medical school, where an audio and video design elective he’d taken helped birth the idea of the podcast and also from the Stanford anatomy lab, where he sometimes led low-income and minority high school students on tours, realizing that many of them had never been exposed to the idea of a career in medicine.

So far, he’s completed 10 podcasts—more than the six required for his project—and plans to do more.

His interview subjects, he said, have taught him how so many people share the same fears and goals: the fear of being unworthy, the pain of being judged, the hope for happiness, and the desire to serve their communities.

“Especially now, with so much hate going on, I feel like if everyone got to know someone who was unlike themselves it would make you a better person,” he said.