NextIn Case You Missed It
One more thing

Fire, loss, and the embrace of community

Above: Photo by Carolyn Lagattuta

You just don’t realize how much of your life is tied to your home until you lose it. The feeling of dislocation goes on for so much longer than you’d anticipate. Days punctuated by crying fits and insurance calls drag into weeks. Two months later, this event still impacts my day-to-day life. I’ve come to accept a far more fluid relationship with reality. 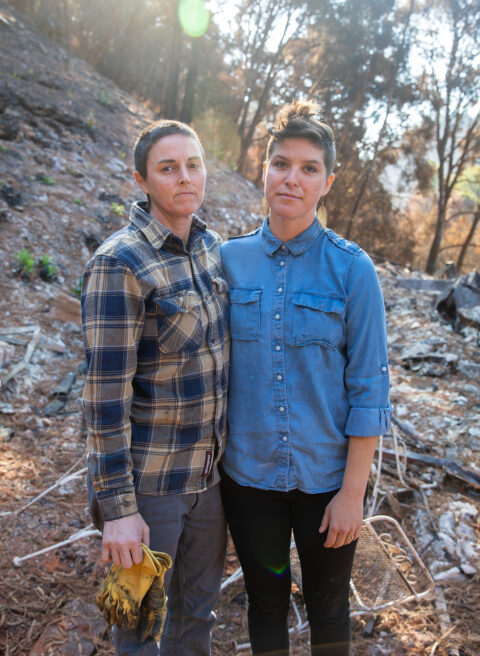 Three years ago, I moved with my partner, Josette Kniffen—now my wife—into a cabin on 11 majestic acres on Swanton Road, which is a small community in Santa Cruz County north of Davenport. You could only see one neighbor. No light pollution, no noise—and so many stars.

When we were home, we were outside, in the woods, literally every hour we could go: mushroom hunting, foraging, hiking around. It was our place of refuge.

On an afternoon in September 2018, we got married, right outside our cabin, in a garden that is like a natural amphitheater, with this fairy ring of redwood trees as both a backdrop and our witnesses.

We were home during the lightning strike in the early morning of Sunday, August 16. The lightning did not wake me, but then the thunder started coming in loud bursts. We probably had 50- or 60-mile-per-hour winds. At one point, it was blowing so hard that trees were bending at a 45-degree angle. I’ve lived in Florida and Texas, and I’ve seen electrical storms, but never like this on the West Coast, ever.

Early the next morning, I awoke to the smell of smoke. An hour later, my neighbor came running out of his house and said six fires had broken out in the Santa Cruz County area.

Over the next couple of days, the smoke sat as a thick haze in the Swanton valley. Our power was out, our landline intermittently disconnected. The buzz of helicopters doing water drops became constant.

Being a Florida native, my wife’s initial reaction was to hunker down and ride it out like she had for hurricanes. But my instinct was to get out because of my experience growing up in Southern California. Two of my grandparents’ houses burned down, and my parents have been threatened by fires multiple times in Los Angeles County, so I knew how quickly this situation could turn very serious.

We kept getting conflicting reports. How close was the fire? Was Swanton in its path?

By Tuesday morning, the air quality had deteriorated so dramatically that it started to affect my breathing, and I went to stay with friends in Davenport.

Josette stayed in Swanton. But later that night, I found out that Last Chance—a community near Swanton—got an evacuation order. I knew Swanton would be next.

I raced back to Swanton, and Josette and I packed like crazy for another few hours. It was surreal. We had two suitcases of clothes, we got our important papers, our cat, our bikes.

We sprayed the outside of the house with hoses and sprinklers. Around 3 a.m., a cop car came up and we ran out to talk to them. They said, “This is a mandatory evacuation.” By then, it was raining ash the size of silver dollars. We had a coop with 22 chickens. We wanted to get them out but we didn’t know if there was time. The police said it could be anywhere from 10 minutes to 2 hours.

I didn’t think we had time to get our chickens. We left the latch on the coop open so they could get out if they had to. We left food for them. We cleared out to Davenport, but when we got there at 3:45 a.m., our friends said, “We’re evacuating, too. Help us knock on doors and make sure everyone is out.”

We wound up staying with friends on the Westside of Santa Cruz. The next day my wife drove up to Swanton and by our cabin—no personnel, no roadblocks, nothing.

Our landlord was just putting around on his lawnmower, like any old day. They exchanged brief words and he told her, ‘‘that was a close call, but I think we’re in the clear.” So Josette grabbed a bag of fruit off the table and left.

Around 6 p.m. on Wednesday, Josette and I were back at our friends’ house where we were staying on the Westside. We were watching Kamala Harris on TV. The phone started ringing. Our neighbor was calling. “Everything’s gone,’’ she said. 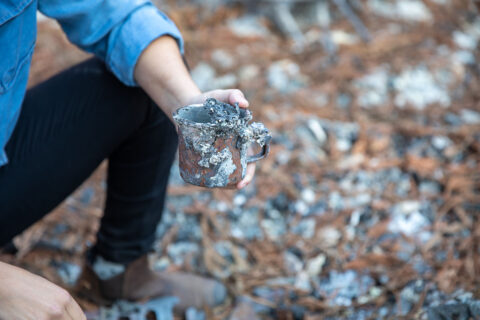 It was hard to take it in at first. I realized we hadn’t taken one of our fancy coat bags with our wedding outfits. They were destroyed.

In the days and weeks after the fire, my relationship with the reality of the situation could fluctuate wildly even within the hour.

When we finally got up there, 16 days after the fire, we saw that our cabin had been burned to its foundations.

We are currently staying in Davenport. Six couples—our friends—live within a two-block radius of us. That’s really nice. When Davenport repopulated, after the evacuation, that was probably the most joyful I had felt since our house burned down—to be close, to be held by our community.

We found a small converted garage apartment. I was encouraged to apply for wildfire relief funds—money raised by UC Santa Cruz—and I did get a very generous grant that allowed me to pay rent to my friend, to use her second bedroom as my work-from-home office.

We’re going to be OK—we’re dual income, no kids, and we have a really supportive community—but one thing that seems really clear to me now is that a lot of people who were displaced from their homes in the fires will not be able to stay in Santa Cruz. The rent here is astronomical. The fire has exacerbated the housing crisis. 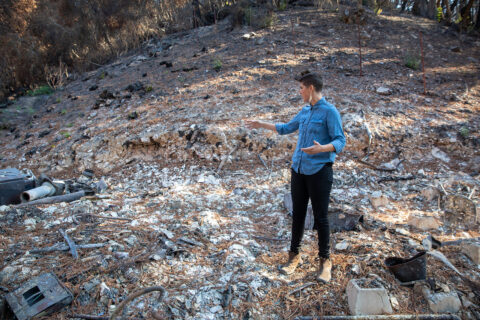 And the fire hits close to home in another way. I raise money for climate action on long-distance fundraising bicycle trips. And I strongly believe that this fire happened as a product of anthropogenic climate change. For me, this fire is a call to action, to get serious on climate issues, because not only is this going to continue—it’s going to get worse.

We’re trying as best we can to get back to normal with help from our friends and loved ones. I will say, our cat, Kidden, has been acting up a bit, as animals do in times of change. He’s living in a new neighborhood with unfamiliar cats.

But they’re figuring it out. They’re rewriting their social structure. Kidden had been doing this weird yowling in the middle of the night for weeks. But for the last two nights, he laid off the yowling. Kidden just might be turning a corner. I’m cautiously optimistic. He’s been sleeping through the night with us.