A catalyst for change

Above: Illustration by Gwen Keraval

Larive, who started work as UC Santa Cruz’s top administrator on July 1, grew up in the legendary frontier town of Deadwood, South Dakota, once the domain of “Wild Bill” Hickok and Calamity Jane, and the subject of an acclaimed and profane HBO program of the same name.

Her years in that rough mining community shaped and informed her life, opening the door to her pursuit of chemistry, while instilling a strong sense that universities are places of transformation for young scholars, including first-generation college graduates such as herself.

Asked about her memories of her Deadwood childhood, Larive joked about the vulgarity-laced language of the HBO series.

“That aspect of the TV show is pretty much true,” she said with a laugh.

But growing up in that environment also toughened her up.

“I worked and sort of scrabbled my way up, with plenty of help and encouragement,” she said. “I had the determination to succeed, and the opportunity. That is what we can offer students here at UC Santa Cruz: the chance to really change their whole life trajectory.”

The path out of Deadwood led to a career as a distinguished professor of chemistry and later as provost and executive vice chancellor at UC Riverside. Now, as she settles into her new job following the retirement of her predecessor, Chancellor Emeritus George Blumenthal, she will draw on the lessons she learned as a scientist and as a professor.

But Larive will also look back on the years when she learned to forge her own path in the world without any blueprint for success.

During an informal sit-down interview in early June—before she officially started as chancellor—in a conference room above Quarry Plaza, she reflected on her upbringing, while considering the challenges and potential that lay in front of her at UC Santa Cruz.

“But there is incredible potential, too,” she said. “We have amazing faculty, widely cited, doing incredible work. How can we as a campus better convey that research and its impact on the global stage? And how can we better support our students—our future alumni—who are going to carry with them the imprint of UC Santa Cruz as they make their way in the world? They will be our best supporters in the long run.” 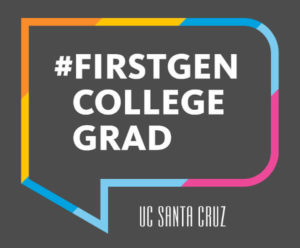 UC Riverside Chancellor Kim A. Wilcox praised Larive’s strategic vision, creativity, and exceptional collaborative abilities, and said her departure was a bittersweet moment for that campus.

“She understands chemistry—both literally, as an accomplished bioanalytical chemist, and metaphorically, as a leader of campus culture,” Wilcox said. “Her thoughtful, gracious, authentic brand of leadership has been a distinguishing feature across her many roles at UC Riverside.”

“Cindy is a testament that first-gen scholars can do anything they put their minds to,” he said.

“I have always found that she asks thoughtful questions, is a quick study on very complicated and politically charged issues, and makes decisions based on what she believes is in the best interest of the mission of the University of California, our students, faculty, and staff,” said Latham.

Larive comes across as a perceptive observer who can swiftly read the mood of a room. Her face lights up when she talks about students. She conveys a quiet self-assurance, chooses words with care, and takes pains to do “deep dives’’ into major issues before making broad pronouncements. From the way she describes it, many of these characteristics were already in place when she was growing up.

“Deadwood was a gold-mining town, and miners are a pretty tough group of people,” said Larive (pronounced Lah-REEV). “It is a place where everyone, except doctors and the gold-mine manager and a few geologists, were pretty much in the same lot. Even though we were poor, pretty much everybody was poor, so I don’t think we knew we were poor. Everyone was more or less the same.”

Larive’s mother, Gladys, was a secretary who completed high school but did not attend college. Her father, Fritz, a foundry worker, had a rough home life, and was forced to drop out of school in the third grade. He did not learn to read until he was in his 60s. Both parents wanted much more for their daughter.

“We all worked very hard,” Larive recalled. “We lived out in the country on this little subsistence place.”

The family kept cows, pigs, chickens, and a garden on a small plot of land. Her father taught Larive how to weld.

“I was always just one of the team,” she said.

But it soon became clear that Larive’s sights went far beyond that small plot of land and the boundaries of Deadwood. The bright, independent girl developed an early interest in chemistry that excited and inspired her, though it also led to a potentially dangerous situation.

Larive’s parents sprang for a deluxe chemistry set for her, complete with an ethanol burner that let her do flame experiments. Larive passed her evenings in her bedroom, placing chemicals on a metal rod, sticking it in the flame, and seeing what color it burned. Then one day, Larive tipped over the burner on her bed, which she was using as a lab bench.

“It ignited the bedspread, and I put out the flames,” she said. “Then I had to tell my mother. She said, ‘Oh well, I guess you didn’t need a bedspread,’ but she didn’t take my chemistry set away. I think that was a really amazing reaction, and I didn’t appreciate it until I was a mother. She could have very easily ended my chemistry career!”

Instead of snuffing out her love of chemistry, her family fanned the flames. To the young Larive, this form of science was almost like magic.

“Chemistry is really interesting to me because it involves the transformation of matter,” she said. “It is taking atoms and organizing them in different ways to create new compounds—new materials that might have very important properties, whether they are sustainable materials to replace plastics or new drugs to cure diseases.”

Chemistry also provided Larive with a metaphor that served her in childhood and continues to resonate today: If you can transform matter, you can also transform someone’s life and circumstances.

As a teenager, Larive worked during the summer as a tour guide through the surface workings of the Homestake gold mine, where the ore was brought to the surface and milled, and the gold extracted. One day, as part of the training for new tour guides, they were taken deep underground and passed a serious-looking man in a white lab coat next to a bank of enormous computers. He turned out to be a scientist from the University of Pennsylvania, performing an experiment to capture solar neutrinos, which are subatomic particles from the sun. Every once in a while, a neutrino would pass through a vat of chemicals, colliding with a chlorine atom, and converting it into argon gas, which the scientist was measuring.

“I had a conversation with this man, and it was the first time I realized being a scientist was a job you could have,” Larive said. “Right there, he convinced me that I should be a scientist and changed my whole life trajectory.

“Then I had the goal of being a chemist,” she said. “But I would have probably never thought about that if I hadn’t met a scientist in that way.”

Larive attended college at South Dakota State University in the late 1970s. At first, she was plagued with the kind of doubts that many first-gen learners face early in their careers as young scholars. In her early years as a college student, she said, “I often worried that I wouldn’t be good enough. I used to worry that I wasn’t going to make it, or they’d ask me to leave, so I worked very hard.”

Larive went on to receive an M.S. from Purdue University in 1982, and a Ph.D. from UC Riverside. 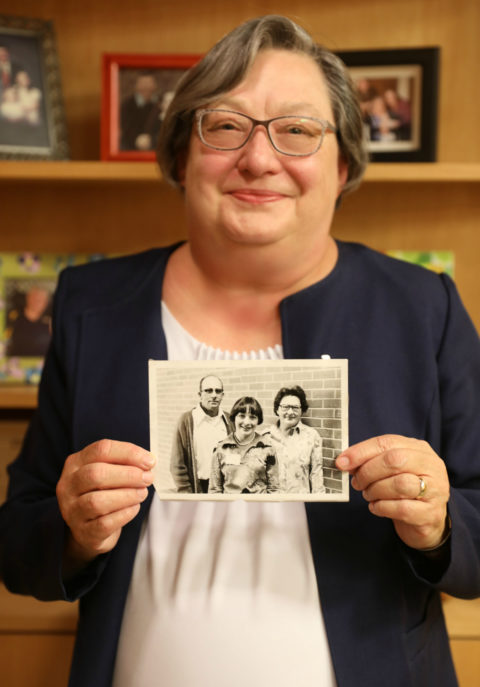 New UC Santa Cruz Chancellor Cynthia Larive holds
a photo of herself as a youngster with her parents.

After obtaining her Ph.D. at UC Riverside in 1992, she went on to make a name for herself at the University of Kansas, with a strong publication record in her field. In 2005, she started work as a bioanalytical chemistry professor at UC Riverside.

Her work as an administrator was not, initially, a matter of choice. In 2012, it was her turn to become the chair of her department. After overcoming her initial reluctance—”I’d avoided it as long as possible,” she said, with a laugh—she discovered that leadership suited her.

“It was rewarding to facilitate the success of the department, faculty, and students,” she said.

Later she moved through a series of leadership positions and wound up taking the position of provost and executive vice chancellor at UC Riverside in 2017, during a challenging period of campus history that required a mixture of compassion as well as toughness and decisiveness.

“When I stepped into the interim provost role at Riverside, it was a time of low morale and a lot of disruption on our campus,” she explained. “The provost had stepped down. My goal was to try and help the campus come back together and move forward in a positive way. I think I was able to accomplish that with a lot of help from other people.”

Asked about her communication style, Larive said, “I don’t know if I have a style. I just try to be transparent and authentic.”

Now that Larive has started work at UC Santa Cruz, she’s getting up to speed on some of the campus’s biggest and thorniest issues.

Among those are the Long–Range Development Plan and the Student Housing West development, as well as the proposed Strategic Academic Plan, which aims to increase research and teaching innovation, impact, and excellence; foster interdisciplinary learning; and increase diversity among faculty, staff, and students.

Though she faces a period of necessary adjustment, she’s thrilled at this new opportunity to support the success of students and faculty.

“It is absolutely true that UC Santa Cruz has enormous potential to impact the future of our students,” she said. “I believe in transformation.”