The UC Santa Cruz creative writing faculty likes to play. They love to get together for complicated multicourse meals, jokes, drinks, and chitchat.

Emerita Professor Karen Tei Yamashita, Professors Micah Perks and Ronaldo V. Wilson, and Assistant Professor Jennifer Tseng are friends who know how to crack each other up. At a recent get-together at Venus Spirits Cocktails & Kitchen in Santa Cruz, these award-winning writers spent so much time joking around that they initially forgot to order their dinners. Yamashita finally relented. “I’m starving!” she said. 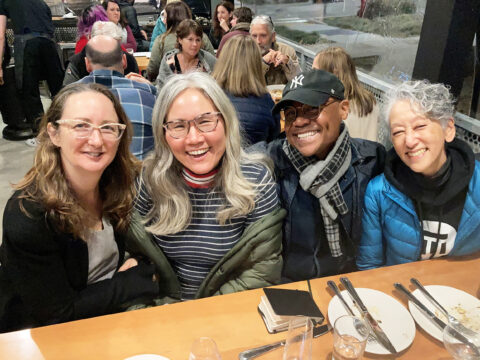 Underneath the laughter is a serious sense of purpose. Along with creative writing professors Rob Wilson and Chris Chen and lecturers Gary Young and Melissa Sanders-Self, this is a cohort of hard-working professors who encourage students to take creative risks while paying close attention to language and the power of words.

“I think what we are doing here is experimental, it is playful, it’s smart, and it’s fresh,” said interdisciplinary artist, poet, and scholar Ronaldo V. Wilson, literature and creative writing professor. Wilson is also a principal faculty member of the Critical Race and Ethnic Studies Department, and an affiliate faculty member of Digital Arts & New Media (DANM).

“Part of it is also just discipline. I don’t know of another vocation, aside from writing, that tests your inner ear,” Wilson continued. “It’s magic—you can’t really explain it—but that discipline is the thing we teach.”

Creative writing is a concentration within the undergraduate literature major at UCSC. Admission is selective. Interested students are required to take one lower-division writing course before applying.

“I am endlessly grateful for my years as a creative writing student at UCSC,” Antopol said. “In addition to being brilliant writers and truly kind people, Micah and Karen are also incredible teachers.

“They both created a classroom dynamic that was simultaneously rigorous and kind, where every piece of writing we brought in was treated with serious respect and consideration,” Antopol continued.

“The support I received in the classroom and beyond gave me the confidence to share early drafts of my work and to embrace and accept their criticism, even when it was tough, because I knew it came from a place of goodwill. My life as a writer began under Micah and Karen’s tutelage,” she said.

Aside from attending seminars and workshops, undergraduate creative writing students also get a chance to listen to established authors and talk to them about 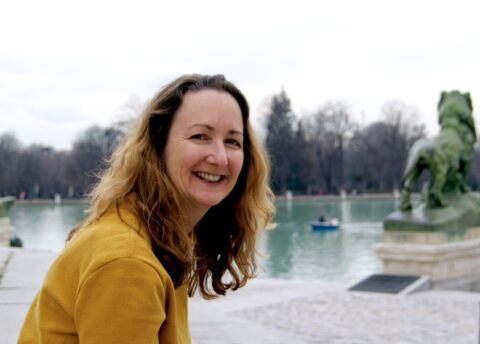 Micah Perks, professor of literature and director of the Creative Writing Program, is also a memoirist, novelist, and short story writer | Photo by Sofia Poblete

the writing life. Organized by creative writing faculty over the years, UCSC’s unique Living Writers Series is open to the public, but is intended especially for creative writing students in quarterly festivals that highlight cross-genre work, diversity, excellence, and inclusion. The series is funded by various organizations including the Porter Hitchcock Poetry Fund.

The latest edition of the series is called “Change Me: Stories of Radical Transformation,” featuring tales of momentous change, from using language to enact gender transitioning in the work of TC Tolbert to journeying across the Mexico/United States border in the work of Yuri Herrera.

UCSC also offers a creative/critical writing concentration within its literature Ph.D. program that launched eight years ago. Students can write a creative dissertation with a critical introduction or a cross-genre creative/critical project. (Critical writing, in this context, means writing that is analytical, theoretical, researched-based, and engaged with ideas and arguments.)

Students have completed speculative novels, collections of poems and personal essays, experimental memoirs, biographies, cross-genre work, and translations of works of poetry and prose. Most of the students have M.F.A.s before enrolling in this program. Many have also published widely in internationally recognized journals and other venues.

“They are doing incredible work,” said Perks, a memoirist, novelist, and short story writer. “Students come in and develop their own projects. It could be anything from a biography to speculative fiction, a book of poetry, or a hybrid project. We have students doing sound, art, and film. Some people are doing critical projects. This program attracts people who don’t want to be boxed in, who are comfortable sliding between critical and creative forms.”

Perks said the program is an excellent fit for UCSC’s Literature Department, “better than an M.F.A., because we have a small creative writing faculty, but so many excellent critical faculty who can help us support the creative/critical students. Our program aims to bring creative and critical play to all our projects.”

“What was great about the program was that it was new and there was room for the first cohort to bring our projects into the fold and watch them grow.

“I really do believe my UCSC experience helped to sustain my energy level in grad school, and the ideas that took bloom there have helped me establish a good research and writing start at UCSB,” Thomas said. 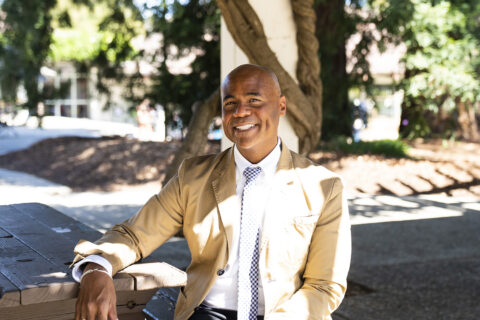 Ronaldo Wilson, professor of literature and creative writing, has taught a course that explored hip-hop as poetic discourse. | Photo by Nick Gonzales

Though Wilson had two teaching assistants, he decided to stay up most of the night reading and commenting on all 60 of the students’ midterm essays. He spoke excitedly about their discoveries.

“Hip-hop by nature is multimodal,” Wilson said. “Graffiti, breakdancing, emceeing, and DJing. Students are already open to what it means, working in that mode. Not all of them turned in papers. Some played guitars. Some were freestyling. There’s a frontier out there we don’t know about. They’re working in so many forms already. They’re working at light speed.”

The current program bears the imprint of Yamashita and Perks, who taught together for 21 years until Yamashita retired in 2018. They were hired together during the same faculty search. Yamashita refers to Perks as “my sister in crime.” 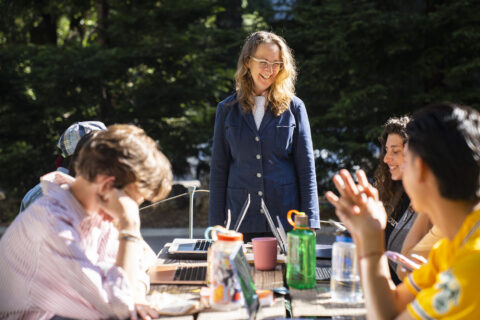 In their classes and workshops, these professors foster a sense of community. When Perks’s students gave their end-of-class readings, she wondered if they would speed on through from one recitation to the next.

“Then the other students in the audience said, ‘Can we give them compliments?,’ and it took so much longer,” Perks said. “Everyone was saying, ‘You are brave, and I love what you did.’”

The class showed their appreciation to a student who was unsure about how his work was going to go over.

“It was so heartfelt and really raw, and the students gave him a standing ovation,” Perks said. “It was beautiful because he was so vulnerable.”

And they are quick to credit each other for artistic and pedagogical inspiration.

“This is only my second year at UCSC, but already my colleagues have had a big impact on my writing and my teaching,” Tseng said. “I’m constantly quoting Micah in my classes. I channel her as often as I can. And Ronaldo’s students are always raving about his playful, brilliant ways. Their feedback, along with his example, gives me permission to take creative risks in the classroom.”

Though she retired from UCSC in 2018, Yamashita is still a presence in the program she helped to build over the past two decades.

She is proud of UCSC’s creative writing program.

“We’ve worked hard to make it special,” she said. “In the early years, UCSC was one of the only undergraduate creative writing programs in the country. Since then, creative writing at the undergrad level is likely in every English/lit program in the country, along with M.F.A. programs at the same sites. Somehow we skipped the M.F.A. and went [to a] Ph.D., much easier bureaucratically, as it turned out. And again, I suspect our Ph.D. in creative/critical is similarly ahead of its time.”

Last year, Yamashita led Tseng’s students on a walking tour of invisible or forgotten histories of Santa Cruz, with stops at the site of the long-vanished Chinatown near the present-day location of Trader Joe’s, and the Water Street bridge, site of the lynchings of two Californios (Hispanic Californians, especially those descended from Spanish and Mexican settlers) on May 3, 1877.

“The walks began because I was researching a new project I call ‘Santa Cruz Nori’—that’s right, not ‘noir,’ but ‘nori’—about erased or forgotten histories of people of color in Santa Cruz,” Yamashita said.

Those walks made such an impression on the class that one of Tseng’s students, Khushal Gujadhur (Porter ’23, literature/creative writing), has begun to lead tours inspired by Yamashita.

Yamashita is a highly acclaimed writer. Her many recognitions include a 2021 Lifetime Achievement Award from the National Book Foundation, which presents the National Book Award every year. The award was presented by Pulitzer Prize–winning author Viet Thanh Nguyen last year.

“It’s fun,’’ Yamashita said when asked for a reaction to her latest award.

“She’s being super modest,” Perks said. “But there are academic books written about her career. Prospective students write applications saying they want to be here because she is here, and they sadly don’t know she’s retired.”

Standing up for creative writing 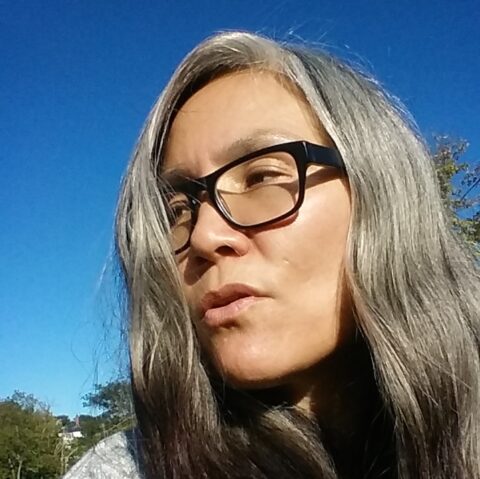 “Taking creative writing classes at UCSC is fun,” Perks said. “Our classes are centered on student voices in a supportive community. Reading and writing critically and creatively with others promotes empathy, critical thinking, social skills, self-knowledge, and joy.

“I once read this study that asked professionals from many disciplines to name the most important skill for success in their professions,” Perks said. “Many of them, including lawyers, doctors, and engineers, named writing as the most important tool for success. If you know how to write well for a general audience, your possibilities are endless.”