Above: Eric Becerra with his parents in the agricultural fields that his father watered for 45 years, and Becerra picked for several summers. Becerra is wearing a Kopilli (headdress) because that’s what his ancestors wore to ceremonies. (Photo by Fabian Becerra)

Eric Becerra earned a B.A. in sociology from UC Santa Cruz’s Rachel Carson College in 2003, an M.S. from San Diego State University in 2010, and an Ed.L.D. in educational leadership from Harvard in 2021.

Yet, if you ask the now-40-year-old son of immigrant agricultural workers about his educational achievements and his work guiding young men of color to success in higher education, his thoughts turn to his parents.

“Life is the most relentless teacher,” Becerra said by phone from his office at Long Beach City College, where he is director of special projects. 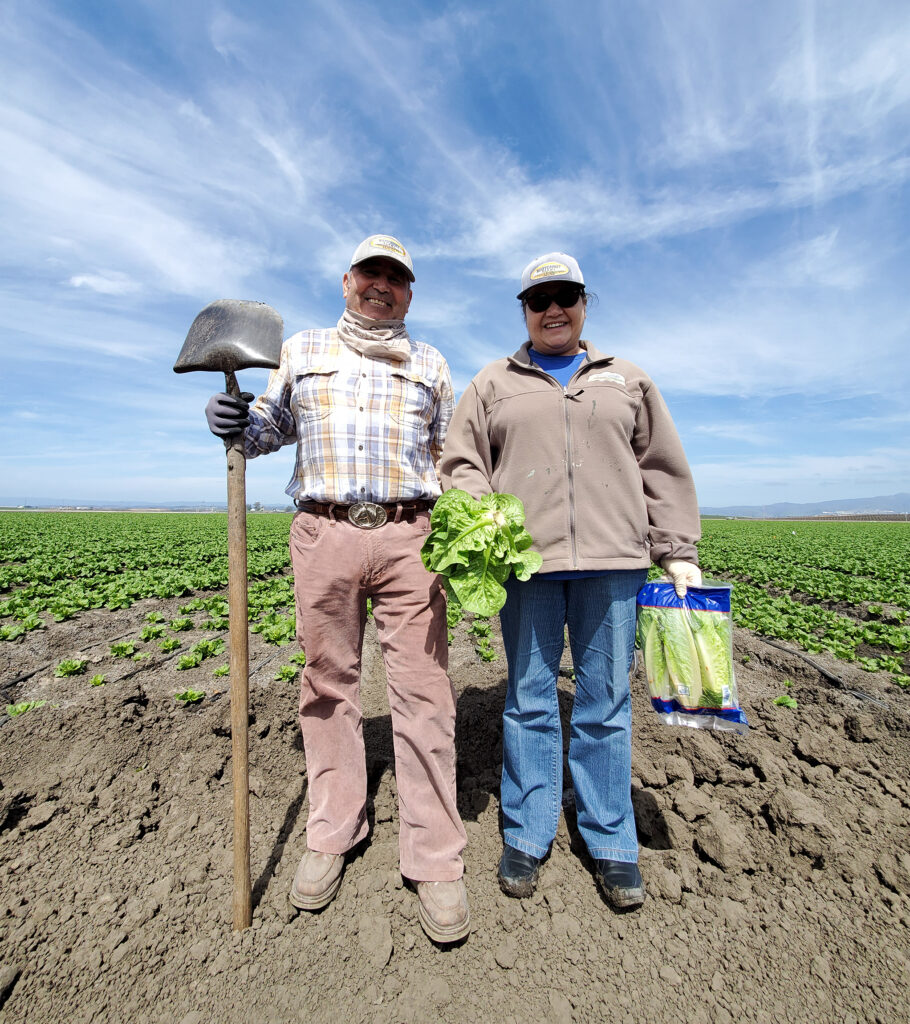 Becerra’s parents, Humberto (left) and Raquel. His father’s job was to water the soil to ensure a bountiful harvest. His mother worked at a local packing shed bagging the vegetables his father had watered so they could make it to America’s tables.

“It tests you before it teaches you.” Which means his parents—his father, Humberto, a hard-working field irrigator for 45 years, and his mother, Raquel, a packing-shed worker turned administrative assistant—basically earned Ph.D.s in life.

So, when Becerra was accepted to Harvard but wondered if he would hurt his children by leaving them behind to get his degree on the East Coast, his father stepped in. A man with a second-grade education who came to the U.S. from Mexico at 17 to help support his 12-member family, Humberto said, “Son, our people have done this for generations. You leave your family temporarily for the sake of something better.”

“That just made it real for me,” Becerra remembered, his voice breaking. “It was a three-year sacrifice, but the light at the end of the tunnel was brighter than the temporary sacrifice.”

Today, Becerra, a mestizo—descended from the Tecuexe, an Indigenous people in Mexico, and the Spanish who came to conquer them—is focused on helping young men of color find success in higher education both through his efforts at Long Beach City College, as well as an LLC (limited liability company) that he and two fellow Harvard graduates founded. Inspired by his experience in the Educational Opportunity Programs (EOP) while at UC Santa Cruz, his mission, he said, is to move educational equity from an imagined possibility to a lived reality for traditionally marginalized populations.

“There’s a phrase, ‘the glass ceiling,’ that’s usually used for women,” said Becerra’s friend and mentor Manuel Bersamin, director of federal TRIO support services at Hartnell Community College and himself a Stanford M.A. “I don’t know the equivalent for young men born into immigrant, monolingual families who work at low-wage jobs, but what Eric has done reminds me of the image of a wall. And I would call Eric an innovative wall-breaker.”

A series of mentors and the exploration of his Indigenous roots led Becerra to a job as a high school counselor and eventually took him to Harvard. It was his experience at UC Santa Cruz, however, that steered him to the work he does now, he said.

According to Becerra, UC Santa Cruz at first rejected his application, which brought out the innate fighter in him. He challenged his rejection and was accepted with the condition he attend a summer session of the campus Bridge Program to prove he had “the chops to academically survive in college,” he said.

“I thought it was a punishment,” Becerra remembered, “but it turned out to be the biggest blessing of my life.”

The program not only provided math and English classes along with exposure to the many aid programs on campus but also helped create community and a lifelong set of friends, according to Becerra. 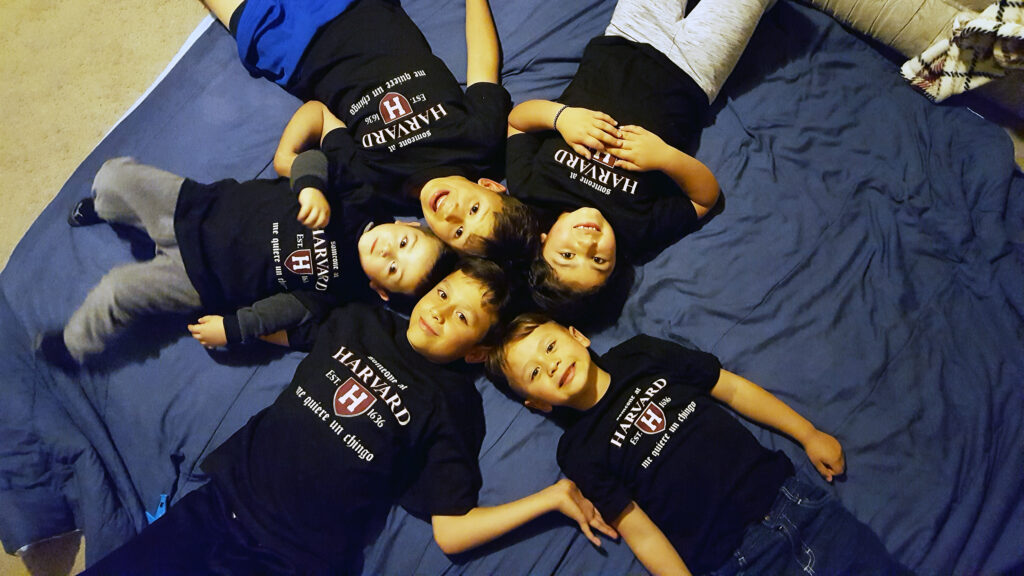 A scene from Becerra’s admissions “reveal,” when he shared the news with his family that he had been accepted to Harvard. He created custom T-shirts with lettering in Spanish that translates to “Someone at Harvard loves you a lot.”

By the time the session was over, the idea of not being quite good enough for university study had been flipped on its head, Becerra said. Instead, the students felt like they were bringing something special and important to the campus.

Becerra started a program similar to Summer Bridge at Long Beach City College, with the idea that young men of color fell behind largely because they didn’t believe in their capacity to succeed. There are, he said, 100 NOBLE Scholars (Navigate Onward to Brotherhood, Leadership, and Excellence) in the program he helped launch. Their mission goes beyond academics, he said, to include an intentional focus on self-identity, self-efficacy, and self-empowerment.

“The goal is to help them jump in the driver’s seat, to accept their greatness, to visualize success, to put themselves in the picture and care enough about their own education to want to excel in math and English,” he said.

For Bersamin, the fact that young men of color are also being exposed to men with advanced degrees like him and Becerra and can visualize their own place in college “is very empowering.”