‘John Lewis’s legacy will imbue all we do’

Once considered a ‘scrappy upstart,’ College Ten—to be named John R. Lewis College following an endowment gift—plans to continue and expand upon the strong programs that led to the naming after the late congressman and civil rights icon

“As a bona fide Banana Slug, I am thrilled that the long-nameless College 10 is now dubbed with the moniker of one of America’s greatest civil rights and political heroes,” the Pulitzer Prize-winning science writer Laurie Garrett (Merrill ’75, biology) tweeted to her 256,000 Twitter followers.

The news was a long time coming. The former College Ten had already made its mark as a proving ground for future leaders and activists. All entering students take courses examining the roots of prejudice and violence; learn to think critically about privilege, inequality, and forms of resistance; and embrace their shared humanity.

But now the college—one of the 10 living-and-learning communities, or colleges, at UC Santa Cruz that enhance the intellectual and social life of the campus—is receiving a burst of much-needed funding, publicity, and goodwill. At the same time, it’s positioning itself to attract more of the politically active students it has been educating, nurturing, and inspiring since its founding in 2002, and raising funds to bolster its anonymous $5 million endowment gift.

“Now is the time not only to highlight and uplift the work that College Ten has been doing for the past 20 years, but also infuse the values of John R. Lewis into our existing curriculum initiatives,” said Sarah Woodside Bury, senior director for college student life at College Nine and John R. Lewis, Cowell, and Stevenson colleges. 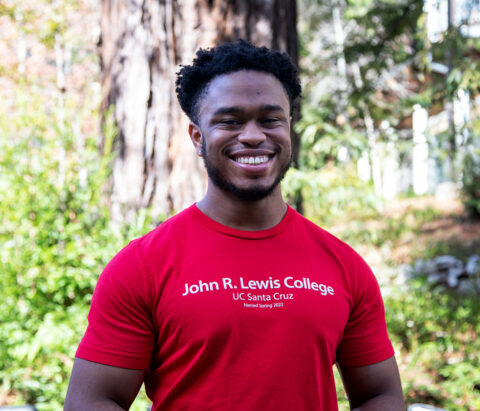 “Having the first college named for a person of color and having it be John Lewis is a historical decision,” said Ethan Davis (Stevenson ’22, molecular, cell and developmental biology), a residential adviser at College Nine and John R. Lewis College (Photo by Carolyn Lagattuta)

This past fall, when Chancellor Cynthia Larive announced the naming gift during a joint communication held on campus at UCSC’s Namaste Lounge and the University of California Washington Center in Washington, D.C., the crowd whooped and clapped and gave her a standing ovation.

Now, students, staff, faculty, and community members are making big plans for the future of a college that was once, in the words of Flora Lu, John R. Lewis provost and environmental studies professor, “an underdog, running on pure love, adrenaline, and dedication.”

The endowment, said Lu, is “truly a transformative gift.”

“Having the first college named for a person of color and having it be John Lewis is a historical decision, and something I personally connect with as a Black male student,” Davis said. “It informs my work by the name itself empowering Black students on campus and focusing on the Black community, which is needed for increasing belonging and strength of Black students.”

A confirmation of core values 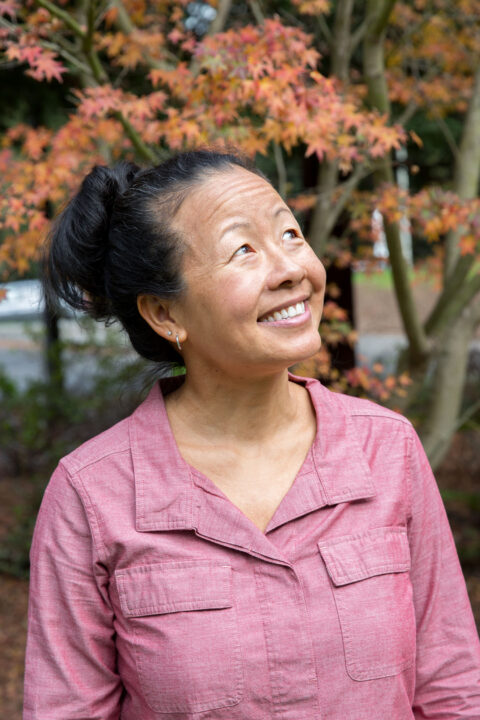 The endowment is “truly a transformative gift,” said Flora Lu, provost of John R. Lewis College and College Nine and a professor of environmental studies. (Photo by Carolyn Lagattuta)

This is the first college that UCSC has named since 2016, when the former College Eight was named for the pioneering environmentalist Rachel Carson, a marine biologist best known for her groundbreaking nonfiction book Silent Spring. That naming gift was a thrilling moment for supporters of then–College Eight, who recognized Carson’s role in inspiring the modern environmental movement.

In a similar sense, College Ten’s conversion to John R. Lewis College is a confirmation of its core values, as well as a strong mission statement that will guide the community’s future, Lu said.

The college community will implement new and deepen existing programs, activities, and events that resonate with issues such as racial justice, nonviolence, voting rights, youth empowerment, and other causes that were essential to John R. Lewis.

“John Lewis’s legacy will imbue all we do,” Lu said. “We recognize that his legacy is not static, but ever-changing in response to the generations to come, the challenges we face, and the aspirations we hold.”

For years, Lu thought of College Ten and its sister college and close neighbor College Nine as young upstarts.

“That’s why this naming gift felt like we were coming to fruition and why it is so moving,” said Lu. “I know just how much our staff and student leaders deserve this.”

UCSC undergraduates from any field of study can join John R. Lewis College, but the college has a special bond and a long-standing connection with the Social Sciences Division, which helps to support its work.

“This is such an exciting opportunity as it allows the Division of Social Sciences to both amplify our existing programs that are rooted in social justice and also to expand and innovate alongside our curious and creative students,” said Social Sciences Dean Katharyne Mitchell.

“John R. Lewis College will be a huge draw for students interested in the future of democracy, and I can guarantee you that they will be at the forefront of creating and spreading inspired ideas and equitable solutions that are so desperately needed in our current times,” Mitchell said.

Advancing a mission of justice and social equity

The endowment will help protect and expand crucial programs at the college including the College Nine and John R. Lewis College CoCurricular Programs Office (informally known as “the CoCo”), which provides learning opportunities exploring the theme of Social Justice and Community.

The CoCo is responsible for a wide range of activities that foster John R. Lewis College’s community spirit, including events, groups, retreats, and classes, as well as hands-on opportunities for learning and taking action on social justice issues.

Through a consultative process involving staff, students, alumni, and Academic Senate and non–Academic Senate faculty, John R. Lewis College is reinvigorating its Pathway of Distinction into a Good Trouble Academy that provides student-centered educational opportunities within and beyond the classroom.

The college will enact its theme of Social Justice and Community based on principles embodied by John R. Lewis, which include:

The legacy of John R. Lewis will also be seen in the 19th annual Practical Activism Conference, which is scheduled for Saturday, February 26, in the Multipurpose Room at College Nine and John Lewis College.

In addition, John R. Lewis College, in partnership with College Nine, the Institute for Social Transformation, the Division of Social Sciences, and the Center for Racial Justice, is organizing a series of five lightning talks from February to April entitled, “Necessary Trouble: Thinking with the Legacy of John R. Lewis,” inaugurating an annual John R. Lewis speaker series at UCSC.

Following in the footsteps of a civil rights legend

The son of Alabama sharecroppers, Lewis attended segregated schools. He showed his remarkable leadership skills and commitment to civil rights from a young age.

As a college student, he organized sit-ins at Nashville, Tennessee, lunch counters that refused to allow Black patrons to dine there. In 1961, Lewis took part in the Freedom Rides, which defied segregation in bus terminals across the South.

Lewis’s commitment to the cause was total. A racist mob injured him, but he refused to give up his fight, helping to organize the Student Nonviolent Coordinating Committee. In the turbulent 1960s, Lewis was arrested 40 times.

He went on to become a long-standing congressman, elected in 1986 to the U.S. House of Representatives, representing Georgia’s 5th Congressional District. He held his post until his death in 2020 at the age of 80.

Building on a strong foundation 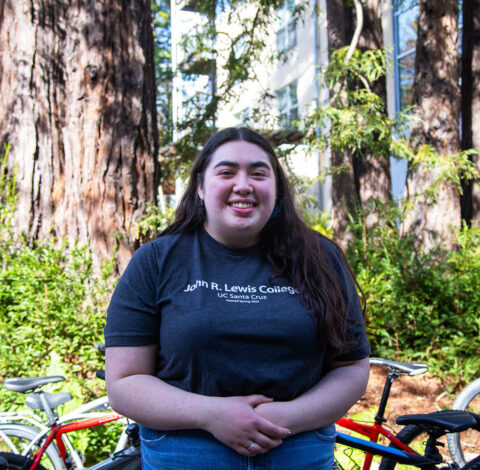 “This is essential to who we are, a reminder that we are a social justice community and we want to reflect what’s happening in our society,” said Tia Mahannah (John R. Lewis College ’21, triple major: psychology; critical race and ethnic studies; and education, democracy, and justice), the college’s co-curricular programs assistant. (Photo by Carolyn Lagattuta)

In fact, her experience inspired her to stay on and work as the college’s co-curricular programs assistant.

“This is the place that allowed me to have in-depth, thoughtful conversations about race,” said Mahannah. “It drew me to the critical race and ethnic studies major and ultimately allowed me to learn about important topics such as intersectionality. It really pushed me not only to learn more about these subjects but to also connect them to my everyday life.

“I always knew that I wanted to work some kind of education-related job,” Mahannah said. “Now I am in a position where I can really support students so that they can get the most out of their college experience and have opportunities to learn about social justice issues. I was so inspired by the people who were my supervisors and now I can hopefully do the same thing for my students.”

For Mahannah, the name change was an exciting reminder of the college’s mission and the impact of her job. 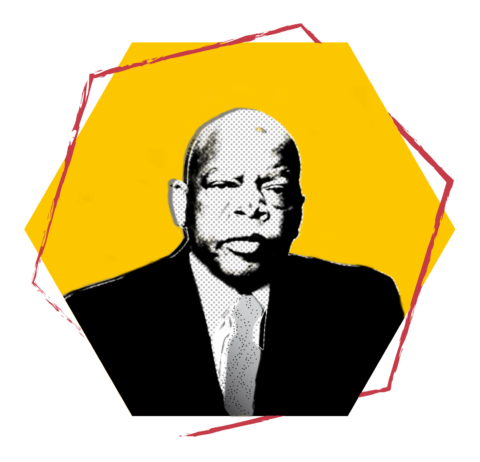 “This is essential to who we are, a reminder that we are a social justice community and we want to reflect what’s happening in our society,” said Mahannah. “During the COVID pandemic, we saw so many important movements, including the increase in the visibility of Black Lives Matter and Stop Asian Hate.”

The naming—and the endowment gift—makes the college better equipped to respond to those social justice movements, Mahannah said.

Mahannah also mentioned a special workshop session titled “Voting 4 Tomorrow,” that will be held during the Practical Activism Conference. This workshop will focus on California Freedom Summer 2022, a university-community partnership that trains college students to mentor other young leaders, conduct voter education, and support grassroots campaigns to get out the vote.

“We want students to participate in these workshops so that they are inspired to become activists and get in ‘good trouble,’” Mahannah said. “We want to use our mission to support students on whatever path they want to take, whether they become grassroots activists or run for political office, following in the footsteps of John R. Lewis.”