NextCreating change, from the molecular level up
Features

The shot felt ’round the world

Above: Photograph of a single vaccine on campus, Photo by Nick Gonzales

The scientists who developed the COVID vaccine pulled off an astonishing feat in less than a year—and then came the hard part.

In this time of uncertainty mixed with relief, UC Santa Cruz faculty and students are now confronting some of the most daunting questions to arise after the first COVID-19 vaccines came online: For instance, how can access to the vaccines be freed-up and universalized globally? How can we build trust among the skeptics, and among those who have been betrayed by public health officials in the past?

What are the best approaches to lowering economic barriers toward getting the vaccine in developing countries? How can populations work together to achieve herd immunity, staying ahead of future COVID variants and mutations that could bring us back to square one if the pace of vaccinations continues to lag behind?

In light of these pressing questions, Matt Sparke, professor of politics at UC Santa Cruz, has been speaking out about the “free the vaccine’’ movement, which aims to unshackle the COVID vaccine from the constraints of intellectual property law, and from the monopolies of “Big Pharma” companies that are developing, making, and distributing the drug with taxpayer support.

Sparke has been questioning certain widely held assumptions about the rollout so far. For instance, he wonders whether well-intentioned philanthropic efforts to subsidize mass vaccinations across the globe will be enough without easily manufactured and cheap generic versions of vaccines also coming online. 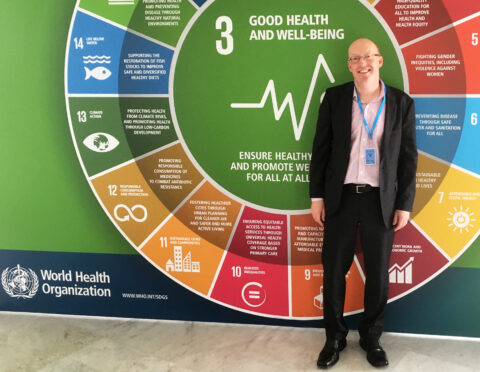 As difficult as it was to develop, the COVID vaccine would not be difficult to spin off and replicate, he said.

Sparke does not wish to downplay the incredible feat of vaccine development.

“We had all these scientific breakthroughs, and a lot of public resources went into them, in spite of all the anti-science attitudinizing and politicking we saw under the prior administration, and that is something to be celebrated,” he said. “There is still bedrock support for scientific research for the public good.”

Yet Sparke has strong concerns regarding access. Lately he has been researching humanitarianism and philanthropic support for the World Health Organization’s COVAX initiative, to ensure rapid and equitable access to COVID-19 vaccines for all countries, regardless of their income levels.

He applauds philanthropists who have stepped in to improve access to vaccines, but he is concerned about the role that giant pharmaceutical companies play in this process.

If we’re solving the problem at a charity level, with donors raising money to negotiate discounted prices with drug companies for countries that cannot afford it, we are maintaining the central role of the drug companies as monopoly producers and distributors, and effectively immunizing them from a fully open public access approach,” Sparke said.

Sparke said a far more effective long-term approach would be a “people’s vaccine,’’ a much cheaper generic version that would reduce the oversized role of those drug companies and prevent poorer countries from getting shut out behind vaccine paywalls.

“Many global health leaders are talking about ‘freeing the vaccine,’” said Sparke, including organizations like Médecins Sans Frontières [an independent medical humanitarian group, otherwise known as Doctors Without Borders], Partners In Health, and Universities Allied for Essential Medicines. “They are all concerned about how Western nation states and drug companies are monopolizing vaccines and preventing poor countries from gaining access because of paywalls.

“In America, the vaccine is free at the point of delivery, based on the U.S. government prepurchasing agreements,” Sparke continued. “But the high price tags put the pre-purchase orders rich countries are making out of reach for poor countries.” 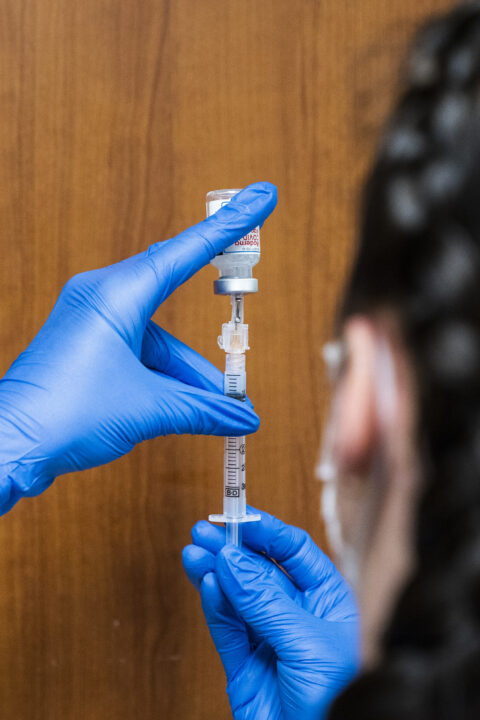 A nurse at UC Santa Cruz administers the Moderna vaccine to essential workers and students.

While donors have the power to raise money and negotiate lower prices for poorer countries, Sparke underlined that far greater access could be secured “if there was a publicly available version’’ of the vaccines.

Patents are not the only obstacle to worldwide vaccine access. Other issues include fragmented state health-care systems, including the poor federal coordination we saw in the U.S. under former President Trump, Sparke said.

But now with the administration of President Joe Biden taking control of the national COVID-19 response, overriding patents is especially important, he said. Sparke mentioned Jeffrey Zients—the White House’s new COVID-19 response coordinator—exploring the use of the Defense Production Act to expand the mass production and purchasing of vaccines.

If this happens, “some sort of reckoning with patent monopolies is going to be involved,” Sparke said. “I really hope they do this as it will certainly speed the national race against the new super-contagious COVID variants, but I also think it will help set the stage for achieving herd immunity at the level that ultimately counts most—which is the whole planet.”

Lately, Sparke has teamed up with one of his students, Orly Levy (Cowell ’21, politics and feminist studies), to write a chapter in a scholarly publication about intellectual property law in the pandemic and how it is affecting vaccine access. 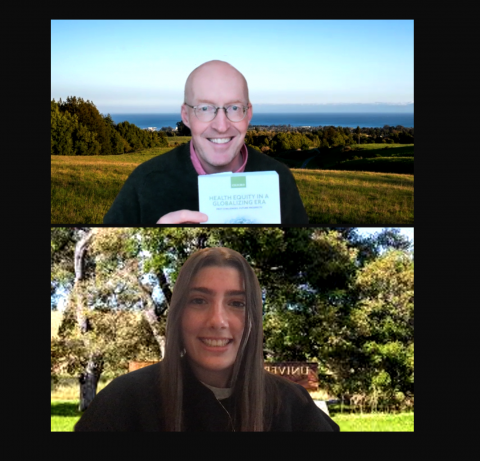 Levy said that her research on the role of “Big Pharma” in the vaccine rollouts has been “kind of shocking, because if there were to be a time to set aside our profit-driven motives, this should be it.”

Certain companies have teamed up with universities with pledges to keep vaccines affordable. This includes AstraZeneca, which has pledged to devote 64 percent of its COVID vaccine output to developing countries. But Levy feels that the charity-plus-Big Pharma approach is “like putting a Band-Aid” on a wound that can’t heal without open access to the vaccine.

She also raises strong concerns about “vaccine nationalism,” a recent catchphrase describing rich countries that have stockpiled vaccines for their own use.

According to a study by Duke University’s Global Health Institute, affluent countries representing a mere 16 percent of the world’s population have monopolized more than half of the available vaccines.

Meanwhile within the United States—with all its extraordinary privilege—the initial rollout is also uneven and inhibited by structural barriers. Supply is not the only impediment to success. 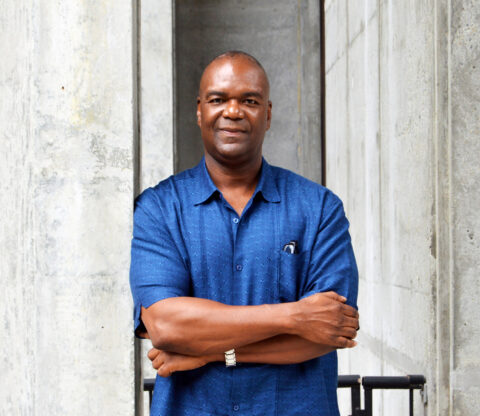 James Doucet-Battle, assistant professor of sociology, says a far greater issue than vaccine hesitancy, regarding the coronavirus and Black and Latinx communities, is questions of access to health care.

Though support and acceptance of the vaccine have been widespread, Sparke was alarmed when he read news stories about pockets of resistance to taking the vaccine, even among some health providers.

One significant cause of such vaccine suspicion relates to recent rounds of anti-science politicking and associated forms of misinformation in contemporary social media. But so-called vaccine hesitancy also has different and deeper historical explanations for American communities who have been victims of medical misdeeds in the past.

James Doucet-Battle, UC Santa Cruz assistant professor of sociology, has written in this regard about the “Tuskegee effect,” stemming from a horrifying secret experiment conducted by the U.S. government from 1932–1972 to study syphilis without treatment, causing suffering and death and undermining community support of the sciences. 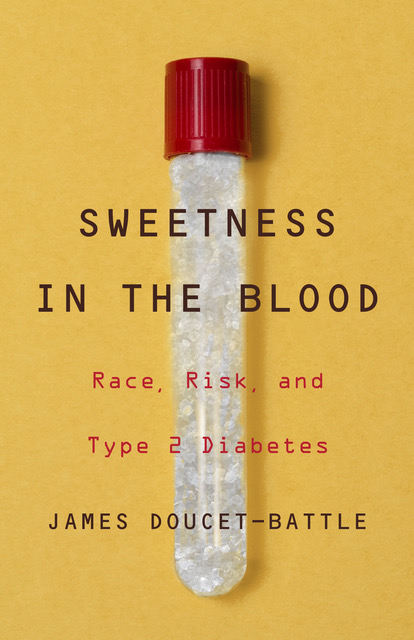 But Doucet-Battle says a far greater issue, regarding the coronavirus and Black and Latinx communities, is questions of access to health care.

“We should resolve therefore to place greater attention upon the underlying health disparities and comorbidities that the pandemic has laid bare,” Doucet-Battle said.

“I think we should begin by acknowledging the difference between the legacy of Tuskegee and the question of trust concerning COVID vaccinations,” he continued. “Tuskegee’s ethical breach involved denying treatment to a racial minority when the cure for the disease was already in existence.

“On the other hand, the COVID pandemic threatens all sections of the population, and the presumptive cure has only recently come online. That said, there has been no groundswell of resistance to the vaccines based on race. I suspect that as time goes on, we will hear less discussion about racial distrust in the vaccines and more about the ethical importance of science as a social good,” Doucet-Battle added.

The need for good messaging

UC Santa Cruz faculty from across the disciplines are trying to find ways to get the word out about the safety and efficacy of COVID vaccines. 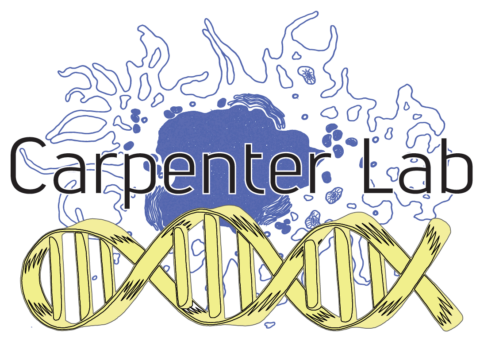 Susan Carpenter, assistant professor of molecular, cell and developmental biology, teamed up with Rebecca DuBois, virologist and associate professor of biomolecular engineering, for an online public seminar about COVID vaccine access with other UC Santa Cruz faculty in February. Carpenter also considers her classrooms to be outreach forums.

“When I teach immunology, I say to my students, ‘I want to turn you into vaccine advocates.’ The best breakthroughs in medicine have been successful vaccines. You would think that living in a pandemic would make that more clear than ever, because it shows you what happens when you don’t have the vaccine,” Carpenter said.

In future public forums, Carpenter hopes to reach the people she calls “vaccine hesitants.” Such people are on the fence.

Carpenter doesn’t see much of a reason to proselytize for vaccines in front of anti-vax absolutists, “people who are not going to budge no matter how much you talk with them about rational arguments or data. That core group, you’ll never change their opinion. But there are ‘vaccine hesistants’ who do have some concerns, and I listen to them. I have facts and data to answer their concerns.”

In preparation for her public seminar in February, Carpenter sent out a survey, in which she asked participants to list their eagerness to get vaccinated from zero to five.

“Some were concerned about the speed of the development,’’ she said. “I think the worst [marketing] mistake in the vaccine rollout was calling it ‘Operation Warp Speed.’”

She said that name helped contribute to the mistaken idea that scientists rushed the vaccine in a way that neglected scientific rigor and safety. In reality, the fast pace had to do with coronavirus research that preceded COVID-19, and the way that the federal government allowed for drug companies to develop vaccines, subject them to clinical trials, and manufacture them concurrently, speeding up the process.

“They should have called the rollout ‘Operation Make Us Safe Quickly,’ because marketing is key, and some people heard ‘warp speed’ and thought corners were cut,” said Carpenter.

Public trust is essential because, she said, “If we want to go back to ‘normal,’ we require herd immunity.” Scientists estimate that 70 to 80 percent of the “global nation’’ must be vaccinated to achieve this.

Such an achievement will require a key combination of public acceptance combined with the elimination of economic barriers.

“Vaccines need to get far and wide right now if we are really going to stop this,’’ Carpenter said. “About 70 percent of people in the United States say they’re willing to get vaccinated. That’s where we need to be, but the numbers are much lower in Spain and Italy. It’s really low, which is very concerning. I’m hopeful that many are just a little hesitant, and good messaging will help us turn the corner.”