Creating change, from the molecular level up

UC Santa Cruz welcomes eminent biologist and Nobel laureate Carol Greider, known for her pioneering work on telomeres and for her powerful advocacy for increasing women and minorities in the sciences

It was 5:15 a.m. when Carol Greider got the unforgettable call.

“I was awake and I was getting ready to go to a spin class because I exercise early in the morning,” said Greider, who recently joined the faculty at UC Santa Cruz as a distinguished professor of molecular, cell and developmental biology. “It was a surprise that the phone rang. I heard this Swedish accent. My brain stopped and my heart was in my throat.”

After she hung up the phone, she sat down to write an email nobody has ever written before or since: “Dear Rachel and Geraldine: I’m sorry I can’t go to spin class. I just won the Nobel Prize.” 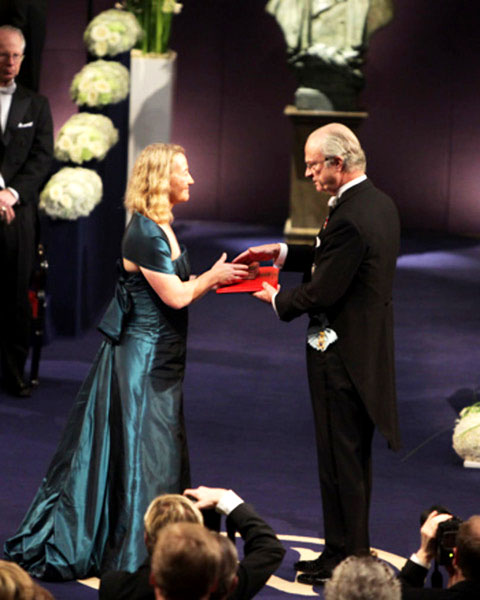 Greider, molecular biologist Elizabeth Blackburn, and biologist Jack Szostak shared the 2009 Nobel Prize for their work on how chromosomes are protected by telomeres, which maintain the ends of chromosomes, and the discovery of telomerase, the enzyme that maintains telomeres’ length.

The prize enabled single mother Greider, her two children, then 10 and 13, and several other relatives and friends to take a memorable trip to Sweden to meet the king and attend lavish parties. Throughout the visit, Greider attracted a lot of attention with people frequently coming up to her asking for autographs.

“My son Charles said, ‘Stop signing these autographs. The price is going up on eBay,’” she recalled. 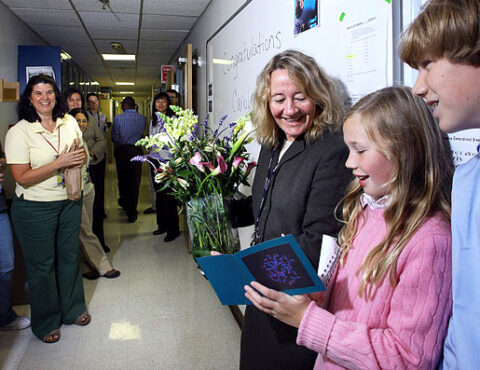 Greider greeted by her lab and children, Gwendolyn Comfort, then 9, and Charles Comfort, then 12. (John Hopkins Medicine 2009; Photo: Keith Weller)

She joins a UCSC department strong in areas that mesh well with her research, including RNA biology, genomics, cancer biology, and stem cell biology, and her colleagues felt her impact the moment she arrived on campus.

“She is already one of the most interactive scientists on our campus,” said Grant Hartzog, professor and chair of the Molecular, Cell and Developmental Biology Department. “She is an enthusiastic participant in our graduate program and is bringing new ideas of how we can best prepare the next generation of scientists. Furthermore, Carol brings an important and powerful voice to our discussions of how we can create a program that allows all students to reach their potential, regardless of their race or gender.”

Chancellor Cynthia Larive said Greider’s skills in the classroom and as a research mentor match her groundbreaking work in the lab. Already she is working closely with graduate students and undergraduates.

“Professor Greider’s mentorship and engagement are invaluable to students,” Larive said. “She is generous in sharing with students how to question and critically analyze the literature as well as their own research results. Her friendly and approachable manner helps students recognize that she is not so different from any of them, and suddenly a successful scientific career feels like it is within their grasp.”

The work that led to the Nobel honor dated back 25 years to when Greider worked as a young graduate student in Elizabeth Blackburn’s lab at UC Berkeley. They were studying how the ends of chromosomes were maintained in Tetrahymenea, a single-celled pond animal.

“You would predict that the ends of chromosomes would get shorter,” Greider said. “In this pond animal, that didn’t happen. We asked the question, ‘Why?’”

Greider described the discovery as basic, fundamental science driven by curiosity. The uses for the finding came later and were not apparent to her and her colleagues in those days.

Unfortunately, she said, there is more of a trend these days to funding translational science, which is designed to lead to direct outcomes.

“As soon as I won the Nobel Prize, I started talking about curiosity-driven research,” she said. “Translational research takes discoveries and then puts them into medical applications. But if you don’t have somebody writing the original text, there is nothing to translate.” 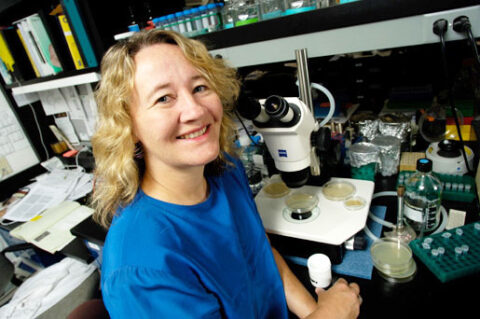 Greider in her laboratory (JHU Gazette 2009; Photo: Will Kirk)

Greider, 59, was born in San Diego to two scientists and raised in Davis. Her father, Kenneth Greider, was a physicist who taught at UC Davis. Her mother, Jean Foley Greider, was a biologist, and died when Greider was 6.

School was not easy for Greider, and she often struggled with sounding out or spelling words. It wasn’t until years later when her son was diagnosed with dyslexia that she realized that she had dyslexia too.

Now, she believes the disability helped her in some ways by forcing her to build her memorization skills (since she couldn’t sound out words, she memorized them). That skill came in handy later when she studied anatomy and had to do a lot of memorizing.

She also learned as a young person how to focus even when circumstances around her were difficult.

“I could put blinders on and do what I needed to do when other things were going on,” she said.

Though you might think that Greider decided to focus on a career in science because of her parents’ background, that wasn’t the case, she said. Her father never told her and her brother, Mark, that they must study science.

“He always said, ‘Try to find something you really love to do,’” Greider said.

She found that love when she took a high school biology class and was interested by the questions in the field. She went on to major in biology at UC Santa Barbara, first intending to focus on marine biology, but later moving on to molecular biology.

She was fortunate to work at four laboratories as an undergrad, which gave her an opportunity to find out if she liked the way the problems were solved in different laboratories.

“You can read about science and different kinds of science in books, but until you’re there doing it yourself, it’s hard to know what will captivate you,” she said. Greider found that she liked the mechanistic understanding used in molecular biology, and went on to further her studies in the field in graduate school.

Getting accepted to graduate school was a challenge for her because she got low GRE (Graduate Record Examinations) scores. Since she was still able to win a Nobel Prize despite the low scores, her opinion of the test is not very high.

She believes those tests are particularly unfair to people of color and low-income people, as those who are wealthy can be coached on how to take the tests.

The UC Board of Regents agrees. The board unanimously voted last year to eliminate the SAT and ACT (American College Testing) exams amid decades of research showing test performance is heavily influenced by race, income, and parent education levels.

Fairness and equity are extremely important to Greider, who is passionate about helping women in science. She has been concerned that there are not enough women professors and deans, and in higher levels of academia.

At first, it was thought that there were not enough women in the pipeline to these higher levels because not enough women were trained in science. But Greider thought that was false because even when she was in grad school 30 years ago, 50 percent of the students were women. At each step, from postdoctorate to assistant professor, women were exiting the pipeline. Several factors were involved including unconscious bias, conscious bias, and increased societal expectations for women around caretaking obligations compared with men.

However, in 2018, the National Academies released a report on women in academic sciences, engineering, and medicine that revealed sexual harassment was an even bigger factor leading to the low representation of women.

“Suddenly it was very clear from all of the things in that report, there was a giant, gushing hole in the pipeline at every level,” Greider said.

While working at Johns Hopkins University she served on an advisory group to the National Institutes of Health about tightening its sexual harassment policies. She also organized a conference on sexual harassment and co-wrote an article for Science Magazine about the conference.

Her experiences made her reflect on how she too had been part of a culture that tolerated sexual harassment. Like others, she would ignore reports of sexual misconduct rather than address them directly.

But while there are many barriers to women achieving high positions in science, she realized that there are even greater obstacles for people of color. She is glad to be working at UC Santa Cruz for its commitment to breaking down those barriers and especially its becoming a federally designated Hispanic-Serving Institution.

“It’s pretty clear that over the past 20 or more years, the effort to really serve first-generation college students and Latinx students has made a difference in the number of people here,” she said. “It’s great to be at a place where that has not only been an idea but also there are processes in place where that has been successful.”

“This is a university that, as a minority-serving institution, understands the importance of opportunity and access,” Larive said. “We are recognized as a leader in supporting student social mobility, and we’re also a member of the prestigious Association of American Universities and can attract world-class faculty like Carol. That’s a rare combination—one I take great pride in.”

Greider is also grateful to join a university where a large group of researchers studies chromosome biology. She especially is happy to be part of the Center for Molecular Biology of RNA and work closely with others studying RNA biology, as telomerase is an RNA-containing enzyme. She appreciates being around others who value mechanistic thinking.

As it has been for everyone, Greider had to make dramatic changes to her life over the last year because of the COVID-19 pandemic. Her children, now 21 and 24, are back living with her because of their own major life changes—one is taking a year off from college and the other had to abruptly return from India because of shutdowns there.

One of the unexpected benefits of the local COVID restrictions has been getting more time to exercise. Since she could no longer travel to conferences or in-person meetings, Greider decided to up her exercise regimen to a total of three hours a day.