Above: President Barack Obama greeted Kalwis Lo upon entering the Oval Office. Lo attended the signing ceremony for H.R. 1911, the “Bipartisan Student Loan Certainty Act,” after working with the White House and Congress to secure its passage. (Photo by Pete Souza)

Kalwis Lo learned an important lesson as he battled a cancer that threatened not only to end his life but also bankrupt his family.

“I discovered education isn’t always about getting a better job or making a good living. It’s about social mobility. It’s about getting access to information and resources that many [underserved] people don’t think about,” said the 32-year-old from his home in Washington, D.C., where he is director of policy at Scholarship America. “That’s what I feel like I’m on a mission to expand.”

Born to immigrant parents who moved from Vietnam to the United States and worked, first in L.A.’s garment factories and then in the restaurant business, Lo knew he was expected to go to college but not how much it would change his life.

As a shy, first-generation student, he felt a little lost on the UC Santa Cruz campus and became involved with student organizations under SOAR (Student Organization Advising & Resources). Soon he was immersed in student government, where he shoved down his fear of public speaking and, at others’ urging, ran for student body president. He won two terms and was also involved with the UC Student Association and U.S. Student Association, ironically working on two issues that would play a big role in his own life.

The first was advocating for the 2010 Affordable Care Act. 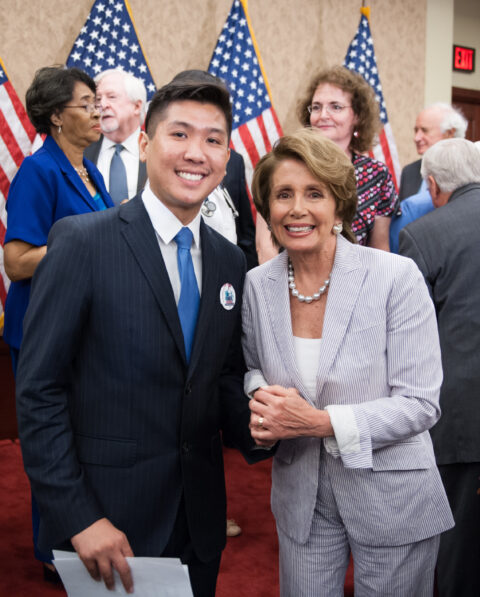 It was a few months after graduation when Lo found himself feeling exhausted and his lymph nodes suddenly swelling. Diagnosed with stage-three Hodgkin’s lymphoma, he needed chemotherapy but his bare-bones insurance plan wouldn’t cover the treatments. Sick in body and in heart for the money his parents were spending to help him and with his insurance now expired, Lo tried to get another plan but was repeatedly turned down because his cancer was deemed a “pre-existing condition.”

That’s when he began to dig deeper into the Affordable Care Act, discovering California was one of the states that offered a high-risk insurance pool plan for people like him.

“That taught me an incredible lesson that higher education is also about access to information and resources,” especially in communities where that isn’t always available, Lo said. “I attribute my survival in part to my education.”

It also renewed his commitment to making higher education affordable to all, the second issue he fought for during his college career.

Once Lo was in remission, he got a position at the U.S. Student Association in Washington, D.C., where he helped work on legislation to tie student-loan interest rates to market rates in order to stop the crippling increases borrowers were facing. After 40 meetings over three months, Lo was invited into the Oval Office, where he watched President Barack Obama sign the 2013 Bipartisan Student Loan Certainty Act into law.

Although some of the meeting is still a blur, Lo said, when he left the Oval Office, he shook President Obama’s hand and thanked him for the Affordable Care Act that had saved his life. Obama asked his name, and an article about Lo’s survival is now part of the Obama White House archives.

Since then, Lo has worked for Scholarship America, which not only gives out $250 million in annual scholarships but also offers mentorships, fiscal-literacy resources, and emergency grants to students. His job is to meet with members of Congress, government agencies, and the White House to advocate for things like removing the taxes on scholarship money that isn’t used directly for tuition and stopping a practice of allowing some colleges to deduct a scholarship amount from other forms of aid the student might receive. He also worked on the passage of a 2019 California law that expanded emergency financial aid for community college students who found themselves in a monetary bind.

Lo remembered how, as the son of low-income immigrants, he hadn’t seen opportunities for himself until he got to UC Santa Cruz.

“A lot of the reason students in underserved communities write themselves off is because they don’t see paths for themselves,” he said.

Lo wants to make sure they do.