The show must (virtually) go on

Above: Portrait of Irwin Scholar, Veriche Blackwell, courtesy of the artist

“It sucks but it will get better, and I’m going to learn a lot.” 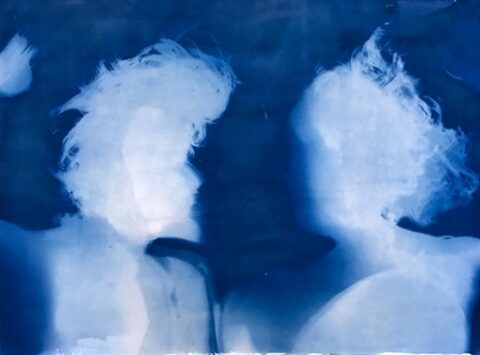 Shadow Dance by Edgar Cruz —Image courtesy of the artist

After eager anticipation and several months of hard work in preparing for a full-on comprehensive exhibition in the Mary Porter Sesnon Art Gallery, the Irwin Scholar students found out—only weeks before their opening day—that the UC Santa Cruz campus would be shutting down due to the COVID-19 outbreak.

And just like that, the students had to quickly shift to remote learning and determine if and when they would be able to have an actual physical show. 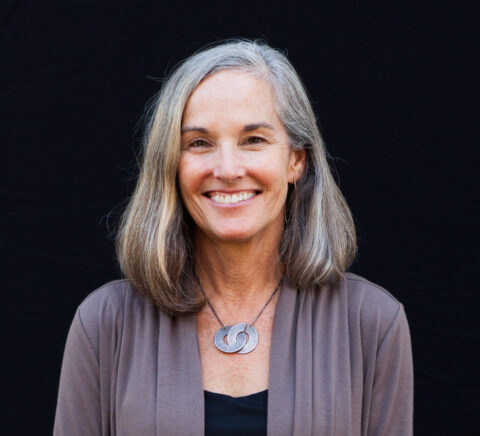 The stark news was a tremendous letdown, to say the least, and one that had many feeling disheartened about the outcome.

The William Hyde Irwin and Susan Benteen Irwin Scholarship is the most prestigious award in the Art Department at UC Santa Cruz and is awarded annually by faculty nomination only. Thirteen exceptional art students, all seniors, were selected based on the excellence of their work, and each was granted $2,500, as well as the opportunity to have a group exhibition at the Sesnon Gallery.

This year’s award winners were:

“We always call it our blockbuster show,” said Shelby Graham, director and curator of the Sesnon Gallery. “The opening is usually a huge party with 250 people. So, we didn’t want to deprive the students of that. During the award ceremony everyone’s family and friends are there, and it’s a very special event to honor the outstanding work of these students.”

Pictures at a 3D exhibition

Once the disappointing news about the cancellation of the Irwin exhibition sunk in, it was time to decide what, if anything, could be done.

“I think there was definitely a couple of weeks of adjustment to at least let the shock wear off,” observed Louise Leong (Porter ’12, art), the Sesnon Gallery manager and preparator. “But most of the students were engaged with reevaluating the process and taking on the challenge, which I really appreciated.”

The idea of having to show their work—from photography and drawing to sculpture and screen printing—via an online platform didn’t seem feasible. Many of the students began getting used to the disappointment of having to do a postgraduation exhibition sometime in the future, if at all.

But there was still one possible solution that could turn the Irwin exhibition from an uncertainty into a reality.

“We wanted to give the Irwin Scholars something more than a website with a slideshow and, since we had made a virtual gallery for our Charles Griffin Farr collection in 2018, we knew it was possible to do it in a short period of time,” said Graham.

She was intrigued with the idea of presenting not just an online exhibition, but one that would actually be a virtual 3D experience. 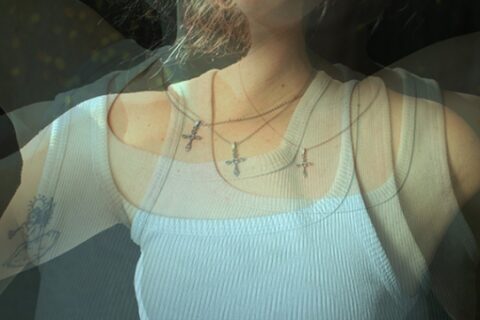 “It was exciting for me because we were taking something based on a physical space and turning it into a universe where we could play with it a little bit more,” explained Jennings.

In the process of re-creating the Sesnon Gallery, Jennings also added parts and pieces to it that weren’t there before.

She virtually removed obstacles, like filing cabinets, in order to allow more space for the artworks.

“A virtual gallery has some advantages over the physical gallery: it can be installed for a much longer time, hold more documentation, and link visitors directly to other resources,” she said.

In the meantime, notified that the show would indeed go on, the Irwin Scholars now faced challenges around working in isolation without being able to collaborate and create together in the art studios on campus.

To make things even more difficult, actual production space and essential tools that many of them used on a daily basis were now literally out of reach. 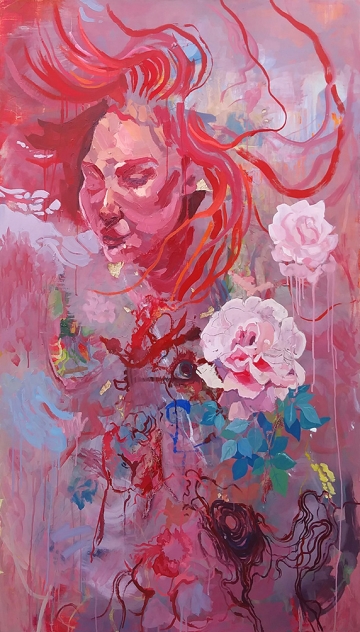 Embed, Coagulate by Morgan Tomfohr —Image courtesy of the artist

How this would affect what they could actually exhibit became a concern that they never would have had prior to being required to shelter in place. They also questioned how their art would actually translate in the virtual world.

But once Jennings showed the students the many advantages of having their art displayed in a 3D structure, new possibilities opened up. Graham was thrilled with the result, declaring it a spectacular virtual representation of the Sesnon Gallery.

“What’s nice about [the virtual space] is that you can size your work to any scale that you want and place it wherever you want in the gallery,” said Irwin Scholar Morgan Tomfohr.  “And so for example, the giant drawing I [was] doing, I could easily have it be larger on the wall so that you could see all the tiny details.”

Jennings also took the sculptures in the show and gave them in-depth 3D formatting where viewers could zoom in and out and explore every feature of the pieces. 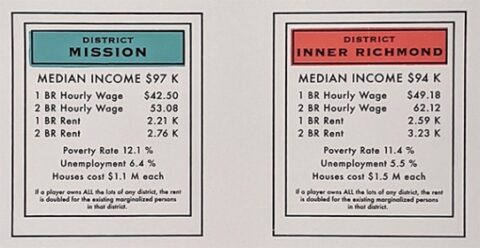 Before the opening of the virtual exhibition, Irwin Scholar Jocelyn Lee contemplated her circumstances after having to move back to her family home in San Francisco.

“Being away from the studio has been really hard,” said Lee. “It’s one of my favorite communities on campus, too. Walking into that space and having everyone greet me and show me what they’re working on…and asking me how I’m doing, has always been a joy for me.”

Primarily a printmaker, she decided to create a text sculpture for the exhibition using letters and doodles from friends that reflected their feelings about being in quarantine.

Joshua Zupan had to scale back his woodblock, screen, and intaglio printing due to the lack of studio access. Instead, he decided to focus on drawing and bookmaking.

“Everyone involved put in a lot of time and a lot of work to make the virtual show happen, which was really great to see,” he said. “But I was pretty heartbroken for a long time. It was only until very recently that I started to shift out of that heartbreak and into more of a motivated attitude.”

Natalie Del Castillo, whose medium is photography, suddenly found herself without an available darkroom and had to quickly switch gears. Time was running out before the opening.

“Circumstances were definitely throwing everyone for a loop and this wasn’t anticipated at all,” she said. Consequently, she crafted cyanotypes—photographic blueprints—for the Irwin show and discovered a lot of varied alternative darkroom practices in the process. 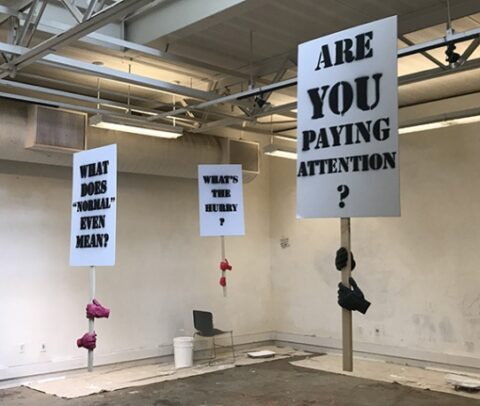 As the days drew closer to the opening date of June 3, 2020, the students were imagining what a virtual opening celebration would look like in the new world of Zoom, and if they could really pull off a successful exhibition.

Many had also found themselves refocusing some of their work to express how the pandemic was affecting them.

The students chose to call their exhibition Collective Solitude, a title that signified their experiences around boundaries of isolation and connectivity, while still needing to negotiate between new technologies and modified traditional arts practices from the confines of their homes and sheltering in place.

For Cruz, a first-generation college student who grew up in South Central Los Angeles, not only graduating from UC Santa Cruz but also being awarded the Irwin Scholarship was especially significant, and he was looking forward to how the virtual show would turn out.

His focus had been on photography and, like Del Castillo, when he had to stay in his home, he started producing cyanotypes that he could process without a camera.

“For me, going to college was a big thing for my family. I’m the first person in my family to go,” he said.

The virtual show did offer one silver lining for him. “It’s great that [the Irwin exhibition] is virtual because now my family from Mexico can see it,” Cruz said.

As the show unfolded in the virtual space, the students’ feelings turned from apprehension to anticipation.

“Everyone was making physical work for the show,” said Graham. “Obviously this year was a different situation. So, we all were working day and night to just make this a great, unique experience for them.” 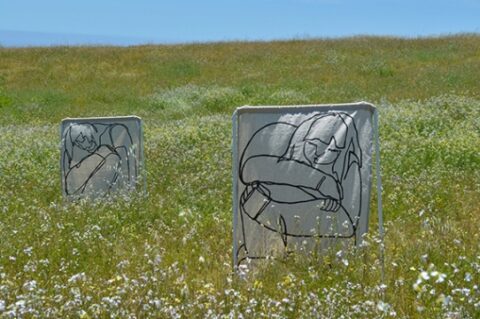 Another Irwin Scholar, Chloe Murr, who had been printmaking but had to switch to painting after she lost access to necessary supplies, was confined to working in her small bedroom on campus. She missed not only having more space but the comradery of her fellow classmates. Even so, as the opening day approached, her spirits were high, as were those of the other Irwin Scholars.

“What’s been really exciting is the idea that I get to show my work with people who are also extremely talented and people who I really look up to,” she said. “It’s such an honor to be able to work with such an amazing team of people.”

The opening night event—together with the virtual gallery—turned out to be a tremendous success with over 150 participants attending the Zoom opening night webinar.

The virtual gallery itself is now up until December 31, due to popular demand. Each of the works was re-created in a lifelike rendition, and users can “walk” through the gallery, contemplating each piece from various angles and perspectives.

Another advantage is that, unlike visiting a physical space, attendees can view the artwork over and over again, take as much time as they like with each one, and do it at their own convenience 24/7.

Going forward, Graham plans to keep including this format with gallery shows.

“We will use these 3D modeling programs to teach students how to use them as curatorial tools for future exhibition planning,” she said.

Rodrigo Ramos, who describes himself as a Chicano artist and activist, was very gratified, as were all of his Irwin Scholar colleagues, to be given the award. His work examines Mexican American pride and Chicano history, touching on themes including those surrounding César Chávez, through screenprinting designs on T-shirts.

“Getting this recognition is a huge achievement for me,” he said. “It definitely makes me feel a little more validated about my art, but also makes me feel appreciated.”

As the Irwin Scholars make their way out in the world, much is still ambiguous. 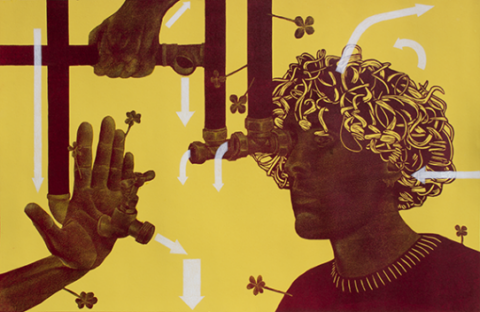 Some had internships and jobs lined up after graduation, but those plans may have gone on hold as the pandemic continued to dictate their futures. Others hoped to attend graduate school but waited to see how fall classes were being scheduled at various universities.

“My experience as an Irwin Scholar this year was both incredibly exciting and deeply challenging,” said Zupan. “Despite the numerous obstacles that popped up as a result of isolation and uncertainty, I had so much fun being a part of this. I felt that the process of art-making within these stringent limitations brought out interesting and intentional works. I also gained great confidence for working in a group of peers and planning an exhibition, with all the challenges that come along. Learning from fellow scholars, Shelby, and Louise, has been a blast.”

All of the Irwin Scholars are still passionate about continuing with their artwork no matter what happens, and already have fond memories about their unique time at UC Santa Cruz.

“I think for a lot of people that I’ve talked to, it’s about existing and it’s about surviving,” reflected Murr as she thought about what lies ahead. “And I’m just taking everything day by day. Because it’s clear now that the whole world can be different in just two weeks.”