By crafting a dangerous future from fragments of history, novelist Margaret Atwood implores us to pay attention to the present, writes alumna Kate Schatz. 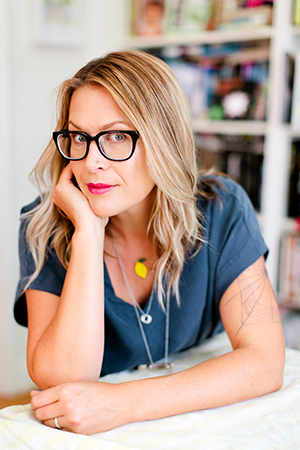 Margaret Atwood’s classic dystopian novel The Handmaid’s Tale was published in 1985; it won numerous awards, inspired feverish debate, and introduced millions of readers—many of them young women who first read the book in high school or college—to a world of extreme sexual violence and misogynist control.

It tells the story of Gilead, a totalitarian regime that has taken over most of America, subjecting women to silence, subservience, rape, and forced childbirth in order to sustain a dwindling population. The book came out in the midst of the rise of the conservative Christian right, a few years before President Ronald Reagan instituted the “gag rule” (even the name conjures the voicelessness of the women in Gilead), preventing doctors and counselors at federally funded clinics from even talking to their patients about abortion.

In 2016, the American presidency was claimed by a man who has been accused of sexual misconduct by over 25 women. His vice president, known for his staunch opposition to abortion, once signed a law requiring the burial of fetal remains from abortions and miscarriages, which would have basically forced women to seek funerary services for a fetus, no matter how far along the pregnancy was.

And that’s not an accident: The books may land in the category of “speculative fiction,” but Atwood is clear about her rules. In the 2017 edition of Handsmaid’s, Atwood uses the introduction to elucidate her world-building guidelines: She “would not put any events into the book that had not already happened in what James Joyce called the ‘nightmare’ of history, nor any technology not already available. No imaginary gizmos, no imaginary laws, no imaginary atrocities. God is in the details, they say. So is the Devil.” So if the dystopian scenarios feel a little too real … it’s because they are.

The writer Mohsin Hamid once wrote, “Fiction can say publicly what might otherwise appear unsayable.” That’s precisely what Atwood does in The Handmaid’s Tale, and in her 2019 follow-up novel The Testaments (also an immediate bestseller, and the joint winner of the Man Booker Prize). By crafting a dangerous future from fragments of history, she implores us to pay attention to the present—to the climate crisis, to the insidious rollbacks of reproductive rights, to the slow and steady dismantling of civil liberties, to the silencing of journalists and dissenting voices.

Atwood takes pains to present the banalities of evil, and to show how individuals can ignore, normalize, enable, and even co-create their own personal, political, and cultural demise. The Handmaid’s Tale and The Testaments depict a corrupt government and its traumatized citizens—but it’s also about how those citizens become complicit in creating the very systems that destroy them.

Atwood rejects the idea of “the future” as something singular—she believes in “an infinity of possible futures.” We don’t know which one we’ll have—liberated and joyful, or totalitarian and brutal. We must fight for one, Atwood seems to suggest, yet always prepare for the other. Joan Didion famously wrote that “We tell ourselves stories in order to live.” Perhaps Atwood tells us these stories so that we can survive.

Kate Schatz, bestselling author of Rad American Women A-Z and Rad Women Worldwide, will be in conversation with Atwood onstage for Atwood’s appearance as part of the Baskin Ethics Lecture series April 5.