A Humanities Institute fellowship brings trained humanists into high-tech companies, providing firms with creative and fluid thinkers while also giving scholars a view into how their expertise can be used in different positions.

Above: VR goggles (Photo by staticnak1983)

Cutting-edge tech, like immersive virtual realities, artificial intelligence, and the emerging metaverse, inspire a lot of excitement—but also dread. Concerns about privacy, as well as racist structures that are often built in, can shadow technological innovations.

This pressing desire to humanize tech, while also making it more inclusive and ethical, adds urgency to an innovative fellowship program, cosponsored by The Humanities Institute (THI) at UCSC and Reality Labs at Meta. This fellowship builds a bridge between the analytical, socially conscious, and literary elements of the humanities and the data-driven realms of advanced technology.

The stakes in this field are high, as companies race to develop new products while seeking to distinguish themselves by ensuring that privacy and inclusion are at the forefront of design in the realms of tech. 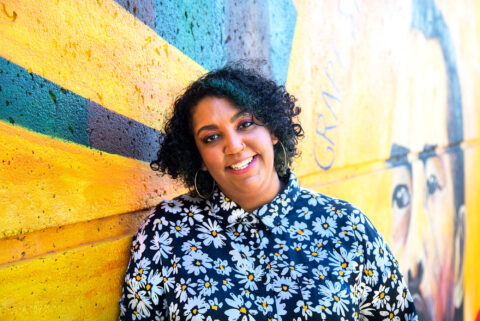 Theresa Hice-Fromille (M.A. ’20, sociology)—a Ph.D. candidate in sociology with a designated emphasis in critical race and ethnic studies (CRES) and feminist studies—worked at Reality Labs this summer as a THI Summer Public Fellow. She worked in close collaboration with alumna Sarah Papazoglakis (Ph.D ’18, literature, with designated emphasis in CRES and Latin American and Latina/o studies), a privacy and trust strategist for virtual reality at Reality Labs and a former THI fellow herself.

“The goal of the project is to yield a report analyzing 10 common themes across nearly 40 diverse speculative fiction texts that center Black, Latina/o/x, Indigenous, and Asian authors and characters,” said Papazoglakis. “It also discusses how these texts might be applied to emerging concerns around the metaverse and recommendations to consider when building for an inclusive metaverse.”

In other words, Hice-Fromille was drawing lessons and observations from fiction envisioning supernatural, futuristic, and other imaginative realms, and translating those reflections into considerations for Meta as it develops technologies.

The metaverse is a broad term for immersive virtual realms in which millions play, socialize, shop with digital currencies, and work in 3D workspaces.

It is an “embodied internet,” one in which users are the experience, rather than just looking at it. It rests on four emerging-tech pillars:

It’s the next generation of the internet—a more immersive, 3D experience. Its defining quality will be a feeling of presence, like you are right there with another person or in another place.

Papazoglakis helps Reality Labs’ product teams and partners with the steps they can take to implement the company’s privacy vision and Responsible Innovation Principles.

Irena Polic (Cowell ’01, linguistics; M.A. ’03)—managing director of The Humanities Institute and a mentor to Papazoglakis during grad school and into the present day—said Papazoglakis’s enthusiastic participation helped make the fellowship a success.

“I was so excited to get a phone call from Sarah saying she wanted to partner on this,” Polic said. “We created our Public Fellows program years ago, hoping for outcomes like these—for our graduating students to go out into the world and make a difference, and also be in a position to serve as alumni mentors to our current students.”

Hice-Fromille said her summer fellowship at Reality Labs has had a huge impact on her future plans.

“It made me realize I don’t have to take just one path when pursuing careers that make use of my humanities-focused degree,” she said. “I’m entering both job markets—academic and nonacademic—this year.”

For the past two years, she has been developing a postdissertation project examining the sense of community and belonging in the African diaspora. Her work with Reality Labs reminded her of the role of computer technology in those community connections.

A place for the humanities in future tech 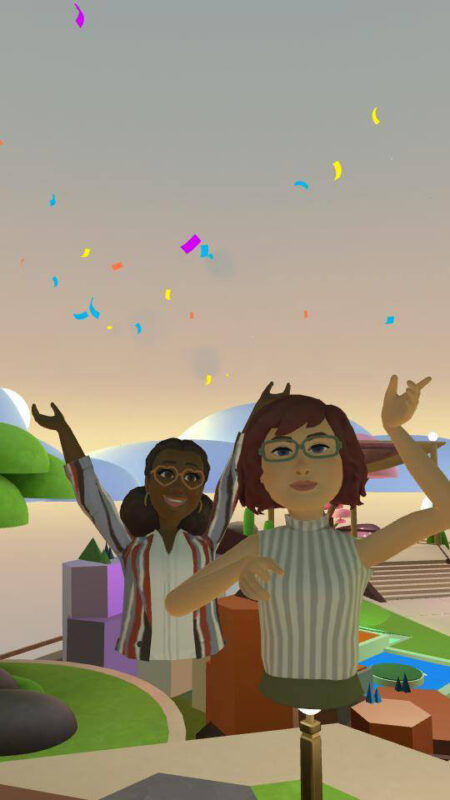 In a sense, Hice-Fromille’s summer position at Reality Labs overlaps with Papazoglakis’s. Hice-Fromille served as a kind of responsible innovation adviser for the lab, drawing her inspiration from works of speculative fiction, including the novels of Octavia Butler, as well as art installations, television series, music videos, feature-length and short films, comic books, and video games.

“My work shows why it’s important to seek out diverse stories to build an inclusive, creative, usable space that generates the best, rather than replicating the worst, social systems,” said Hice-Fromille.

Hice-Fromille mined those texts for recurring themes, including the fears of marginalized communities targeted for surveillance. She also examined texts showing how such communities imagine resistance to tech-enabled oppression.

“It is a bit nerve-wracking to know that people in such a hugely impactful company might care what you have to say,” Hice-Fromille said. “It’s also a huge privilege. My biggest hope is that I did justice to the texts and the creators and communities from which they came.”

“We call this ‘social presence’—a feeling in 3D technologies in which simulated sight, sound, and touch, for example, can make you feel like you are physically present with someone when in this 3D world,” Papazoglakis said. “Afrofuturism and other diverse ‘futurisms,’ as Theresa’s work has started to highlight, is ultimately concerned with how we share power in real and imagined worlds, how we protect vulnerable communities, and how we negotiate our relationships with technologies that change our relationships to one another, to the institutions we work within.”

Asked how she envisions the role of the humanities in the technologies of the future, Hice-Fromille said it’s hard to predict, but “if it were up to me, I would hire humanities scholars first and engineers, etc., second.

“To me, that is the level of importance of humanities in tech. I still have so much to learn about the tech industry, but I have had really great conversations with engineers on the team and I feel like there is interest in bridging these different types of knowledge, which makes me very hopeful.

“It is up to tech leadership to bring more humanities scholars into these companies and create pathways for them to contribute and have their work taken seriously.”

UCSC-trained scholars such as Hice-Fromille and Papazoglakis help humanize tech. By example, they also show that a humanities degree from UCSC can open up multiple career pathways in and outside the realms of academia.

“I am obviously a big fan of the work that humanistic scholars do, but it isn’t widely known or discussed within graduate school what opportunities are available to us outside of academia,” Hice-Fromille said. “This was an amazing chance for me to peek behind the curtain to see what applied work means for scholars in the humanities.”

She especially wanted a clear idea of what she could tell CRES and feminist studies students they can do with their degrees—especially when Silicon Valley is quite literally at UCSC’s doorstep, Hice-Fromille said.

“What I’ve figured out is pretty simple: We’re researchers just like in any other field—we collect, organize, and analyze data,” she continued. “But our humanities training also encourages us to think in such fluid ways, which I believe is why tech companies should be looking to hire more humanists.”

Training for a range of meaningful careers 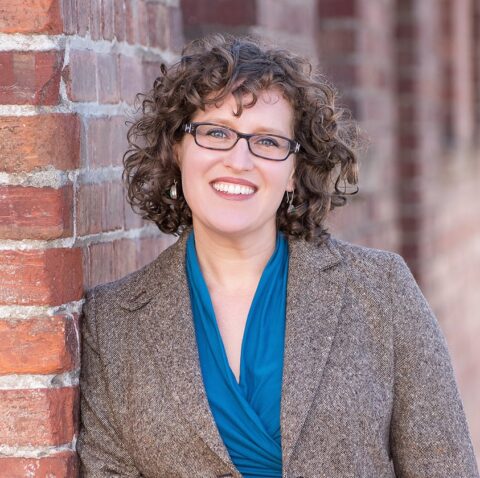 Papazoglakis has a similar career philosophy. Before her work at Reality Labs, she was part of the first cohort of THI Public Fellows at UC Santa Cruz in 2016, partnering with California Humanities.

THI’s Public Fellowship program was established to give students hands-on experience exploring how their humanities expertise and skills can be used in different positions. It helped Papazoglakis see how her academic training set her up to pursue a range of meaningful careers. Following her Ph.D., she started in a position at a strategic communications firm and then worked as a senior privacy policy analyst for the city of San José.

During COVID-19, she transitioned into the private sector with her Reality Labs job, which required someone with a wide range of skill sets, a big dose of creative thinking and adaptability, as well as specialized expertise in privacy and responsible innovation.

Papazoglakis strongly believes that her experience completing her doctorate, along with some later real-world experience, made her an excellent candidate for the Reality Labs job. She spoke about the way her training in critical race and ethnic studies and literature enables her to draw connections between historical and current inequities produced by power structures and the downstream effects those structures can have on tech products.

She also sees the job as a way to build on the teaching skills she picked up at UCSC.

“Those skills have been critical for guiding teams through deep discussions on difficult issues and helping them to work collaboratively with people with different skill sets and points of view—engineers, policy leads, designers, etc.—to design products responsibly,” said Papazoglakis.

Looking toward the future

“Not to be too Pollyanna, but I do think that projects like this one are a start to addressing these concerns, along with projects like the AI Policy Futures and the Metaverse Standards Forum, which bring together people from a wide array of backgrounds and disciplines.

“But I’ve also learned in my time at Reality Labs that companies also look to consumer demands and laws to address these concerns,” Papazoglakis said. “I think that humanities Ph.D.s can help to build a shared vision for what ‘we’ want this technology to be in addition to offering important critiques about where it fails.”