NextGiving back to Banana Slugs in need
Giving

Above: Jim (left) and Joe (right) in May 2017 during a hike in a national park on the Spanish side of the Pyrenees.

Jim Myers and Joe Levesque have each faced discrimination for being gay. Myers lost job opportunities at the White House and Library of Congress. Levesque was kicked out of the Air Force. The two, however, went on to become self-made men of means. Now, they want to give a boost to others who need it.

Together for 41 years and married for 7, Myers (Stevenson ’76, linguistics) and Levesque have established several endowed funds for scholarships at UC Santa Cruz through their estate plan. 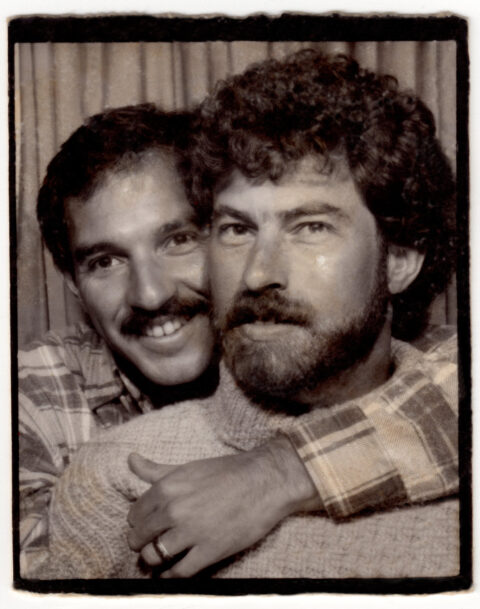 Joe Levesque (left) and Jim Myers (right) in fall 1979 at a photo booth at Fisherman’s Wharf in Monterey.

“UCSC took a chance on me, and I greatly benefited down the road from that quality education,” said Myers, who was a transfer student from Monterey Peninsula College. “Having no children of our own, we decided to use our life’s work to help worthy students get the same opportunities I received.”

Both retired from the Library of Congress—Levesque as a special events planner and Myers as a cataloging librarian. Before that, each had careers in the military. Levesque was an air traffic controller in the Air Force, and Myers, who is fluent in Russian and has a postgraduate professional certificate in Russian-English translation, was a spy for the U.S. Army Security Agency. He was stationed at a remote listening post along the East and West German border during the Cold War.

The two had independently studied at the Defense Language Institute in Monterey, later met in Carmel, and have a love for the area but decided to leave for career reasons. Arriving in Washington, D.C., with only $2,000 in their pockets and Myers’s student debt, they not only worked their day jobs but also set about personally restoring a three-story Victorian in the Bloomingdale neighborhood of the city while also catering fancy political and media events after work and on weekends. They built capital, invested, and prospered. In retirement, Myers and Levesque are active volunteers and also spend lots of time traveling to remote corners of the globe.

Both children of working-class families who bootstrapped their way to success, they have earmarked scholarships for LGBTQ students; linguistics majors; and to those studying in fields related to humane technology such as artificial intelligence, machine learning, and open-source software, as well as games and playable media.

“With these bequests, we are putting our money to work,” Levesque said. “We are gratified to know that, down the road, our own success in life will translate into some lasting good for many others and for our country as a whole.”

If you would like to discuss how you can include the university in your estate plans, please contact the Office of Planned Giving at gift.planning@ucsc.edu or (831) 332-3934.