NextBeating crime by a hair
Features

Students, alumni, and community members are participating in a “Deep Read” on the bleak dystopian futures of Margaret Atwood in advance of the Booker Prize–winning author’s on-stage discussion during Alumni Weekend

Due to ongoing COVID-19 public health measures, this event will no longer be held on April 5. Please check back for updates. 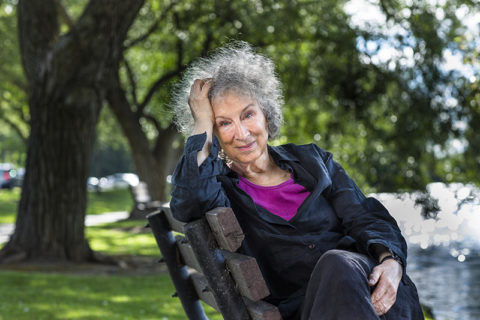 Margaret Atwood’s imaginary Republic of Gilead is a futuristic nightmare, but many of her fans think it’s uncomfortably close to their present-day 21st-century reality.

Her 1985 bestseller The Handmaid’s Tale takes place in an environmentally degraded North America, where people live in a state of constant surveillance and human fertility is compromised. The U.S. government is overthrown by a totalitarian theocracy that enslaves the few still-fertile women as “handmaids,” or child-bearers, for the ruling class, and other women as servants. Women are not allowed to read, write, or drive, and breaking the rules is met with sadistic, savage punishment.

The novel has an enduring power to enchant and frighten readers, along with a metaphorical richness that makes it relevant and chilling to every generation.

Since its publication, Atwood’s dystopian epic has sold 8 million copies and was recently turned into an Emmy Award–winning television series. A long-awaited sequel, The Testaments, sent fans into a feeding frenzy when it was released in September.

Gilead is a horrible place to visit and a worse place to live, yet fans can’t get enough of it. Now, Atwood’s California fan base has yet another reason to rejoice. The Booker Prize–winning author is scheduled to appear at UC Santa Cruz on April 5 at the campus’s newly restored, 2,500-capacity Quarry Amphitheater, where she will be in conversation with Kate Schatz (Stevenson ’01, women’s studies and creative writing), bestselling author of Rad American Women A-Z and Rad Women Worldwide. The discussion, entitled “Futures,” will be one of the highlights of this year’s Alumni Weekend.

“Futures” is a fitting title for a dialogue that will engage Atwood’s dark, dystopian visions, which take place hundreds of years from now. The Handmaid’s Tale introduced the public to the fictional republic of Gilead, a theocracy ruled by a select group of men, who dole out corporal punishment and executions with hypocritical zeal, using their twisted interpretations of the Bible to justify their behavior. “Handmaids” are forced to bear the children and names of the brutal and barbaric colonels they are assigned to.

Women are treated like chattel, with the exception of specially designated “Aunts,” who roam around with electric cattle prods keeping handmaids in line. Even the aunts are in constant danger, with other aunts waiting in the wings to undermine and betray them at all turns. Those who disobey wind up hanging from an enormous wall.

The Testaments will also be the focus of a new initiative by The Humanities Institute (THI) at UC Santa Cruz called the “Deep Read.” Students, community members, and alumni will read The Testaments and gather on March 10 to discuss the book at the Hay Barn near the base of campus. This Testaments “salon” will include a panel of faculty from across campus, including:

It’s no big surprise that news of Atwood’s April 5 appearance on campus is already causing a stir.

“The event could possibly be the biggest of the academic year,” said Irena Polic (Cowell ’01, M.A. ’03, linguistics), managing director of THI, which is presenting the on-stage discussion with Atwood and Kate Schatz.

“Atwood’s work shows that humanities can look to the future,” Polic said. “Humanities are often thought of as something that looks back through history, literature, and philosophies from ancient times. But the humanities can also project forward and inform—or perhaps warn us of—the way we imagine the future of our world.”

The talk is part of THI’s Baskin Ethics Lecture series, and will be open to the public and students. Tickets are $30 (free for the first 1,000 UCSC students to sign up) and may be purchased via the UC Santa Cruz events calendar.

Atwood’s speech is part of a series of themed public presentations called “Questions That Matter,” made possible by a $1.5 million grant from the Andrew W. Mellon Foundation to expand the impact of humanities at UC Santa Cruz. Past topics include race and freedom, data and democracy, and the future of investigative journalism.

In preparation for Atwood’s talk, 300 undergraduates who are enrolled in UC Santa Cruz’s College Scholars Program have been immersing themselves in The Handmaid’s Tale, The Testaments, and other dystopian fictions, including another popular Atwood work, the 2003 Oryx and Crake.

The scholar’s program, which offers a supportive and engaging environment for a select group of first-year students, is already fostering intense dialogue across the campus. Participants in this program have been getting together with provosts at Cowell, Porter, Crown, and Merrill colleges to share their Gilead perspectives.

The Gilead books are rich material for discussion because they reflect, and seem to anticipate, world events and global trends, said Sean Keilen, provost of Porter College and professor of literature at UC Santa Cruz.

“The Testaments is really interested in a world that has turned toward nationalism and away from globalism,” Keilen said. “The book takes place in a scary version of the world we already live in, echoing current events that are actually happening now, such as England leaving the EU and the federal government contemplating building a physical barrier between the U.S. and Mexico.”

Not such a “whacko” idea after all

Atwood never expected such fuss and intensive argument about The Handmaid’s Tale when she undertook this edgy, risky project.

“When I first started thinking about it, I thought it was such a whacko idea,” she admitted in a 1986 interview. “I wrote it with some trepidation. It could have been the worst failure you could possibly imagine. I was afraid people would say it was silly. There was also the risk it would be thought feminist propaganda of the most outrageous kind, which was not really what I intended. I was more interested in totalitarian systems, an interest I’ve had for a long time.”

Clearly, Atwood’s fears were misplaced. More than three decades after its publication, The Handmaid’s Tale has lost none of its potency.

The violence and paranoia of Atwood’s dark world has been shocking readers for 35 years. But Atwood, in several interviews, has emphasized that this fictional world has the underpinnings of reality.

“I made a rule for myself,” she once said. “I would not include anything that human beings had not already done in some other place or time, or for which the technology did not already exist. I did not want to be accused of dark, twisted inventions, or of misrepresenting the human potential for deplorable behavior.”

The Handmaid’s Tale is a masterwork of story-craft, characters, setting, world-building, and nail-biting suspense. Atwood’s books even have some blink-and-you-missed it examples of sly, satirical humor. For instance, several scenes in The Testaments take place in “the Schlafly Café,” a dig at the right-wing leader Phyllis Schlafly, who was one of the inspirations for the character Serena Joy. 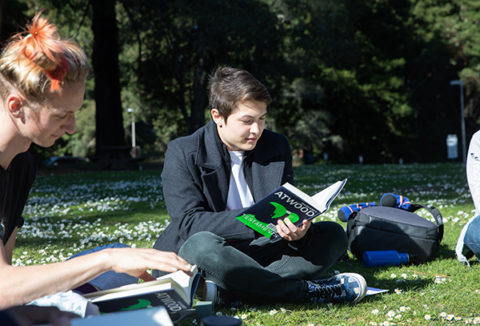 Students take part in a reading of The Testaments (photo by C. Lagattuta)

In November, Cowell College students gathered to dissect The Testaments, delving into the characters, the plot, and the social context for the book, said Alan Christy, Cowell provost and UC Santa Cruz associate professor of history.

“They understood the novel to be about how individuals are implicated into and possibly separate themselves from totalitarianism, an issue that they felt was well worth discussing,” Christy said. “It was a lively discussion that showed this group of students really embraces their education as an engagement with the world, rather than just their classes or their majors.”

UC Santa Cruz arts and humanities lecturer and former THI fellow Laura Martin, who is teaching a course called Margaret Atwood’s Dystopia and the Present, has been exploring an essential question: Where is her dystopian fiction looking, and what is it asking? Atwood has said, in several interviews, that real-life dystopian societies and repressive regimes, including Puritan communities in the United States, informed her work.

“So are these books critiquing the past or the present, and where is she wanting us to look?” asks Martin, whose course is being sponsored by Porter College. Martin has also considered the political realities that were happening when Atwood published The Handmaid’s Tale, including “neo-liberalism and conservatism in the Reagan era. The Testaments was published in this post-crisis, reactionary moment of Trump.”

At Crown College, students will focus on “the anatomy of power” when discussing Atwood’s books, said Manel Camps, Crown College provost and associate professor of microbiology and environmental toxicology.

“The way I see it, this two-book series lays bare the mechanisms by which ideologies can be co-opted in order to establish control of a society, as in The Handmaid’s Tale, and to consolidate that control (The Testaments),” Camps said. “These mechanisms are common to a variety of oppressive regimes, regardless of their ideological slant.”

But there is also a hopeful component in those books, with plotlines about bravery, heroism, sacrifice, and the flaws that could undermine the Republic of Gilead. Camps noted that The Testaments is a far more optimistic book than The Handmaid’s Tale. Spoiler alert: this Booker Prize–winning sequel shows that the real and metaphorical walls around Gilead are not quite so strong after all.

After reading these books, students will come away with a close look at a repressive regime—but they will also see the blueprints for its implosion, Camps said.

“By exposing these mechanisms (of injustice),” said Camps, “Atwood is also revealing their vulnerabilities.”